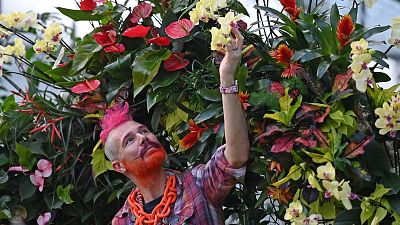 More than 5,000 orchids are going on display at the Royal Botanic Gardens, Kew in London for its annual embrace of the flower.

This years inspiration is taken from biodiversity of Costa Rica and its flora-rich rainforests.

The display also promotes Costa Rica's famed fauna, with handcrafted sculptures of animals made from natural materials and nestled throughout the plants.

Around 6,000 plants have been brought in for the showcase, including the 5,000 orchids originating from around the world.

"Through the glass house we tried to bring in as much colour to just transport people into that sort of feel good world of Costa Rica...to make it really pretty and smashing," says florist and Kew volunteer Henck Roling.

Roling explains the team have spent much of the past two years planning for the festival as it makes its return to Kew after COVID-19 delays.

The Dutchman has made an enthusiastic effort to keep with the orchid theme through dying his hair and beard bright colours and adorning himself with an orange garland.

An amazing array of shapes and colours

Various individual displays of the different orchid types are dotted around Kew's expansive and misty Princess of Wales conservatory, interspersed between water features, ferns, monsteras and other greenery.

The colourful host of plants began arriving in January. It took dozens of volunteers and staff weeks to assemble by hand into their immaculate displays, says Alberto Trinco, acting supervisor of the conservatory.

"It's one of the biggest plant families and they are such an amazing array of shapes, colours, and other adaptations and co-evolution with their pollinators, which is quite mind-blowing sometimes," he adds.

A section of the exhibition delves deeper into orchids, explaining everything from family tree and anatomy to their use for celebrations in Costa Rica.

The number of orchid species around the world is more than twice the number of bird species, so there's a lot to explore.

Costa Rica is one of the world's finest plant protectors

The organisers chose the Central American country, which is home to more than 1,600 orchid species, to "celebrate its biodiversity, its effort towards conservation and its culture".

Other countries previously as a theme for the yearly showcase include Indonesia, India and Colombia.

This year, Costa Rica is being recognised as a world-leader in managing its natural environment.

Last year, the country was an inaugural winner of Prince William's UN-backed Earthshot Prize in recognition of its efforts to tackle environmental degradation and promote sustainability.

Alex Munro, a botanist at Kew specialising in discovering new plant species in the tropics, said he and colleagues had worked with the Costa Rican ambassador in London to help inform some of the science behind the exhibits.

"They have lots of species in Costa Rica which you wouldn't find anywhere else," he says. "They capture fully the diversity of orchids in the Americas,"

Tickets to 'Orchids 2022' and the rest of Kew Gardens can be found here. Entry for adults costs £19.50 (€23) and £5 (€6) for children. Concessionary tickets are available for students, disabled visitors, people on Universal Credit, and Kew Members.

Check out the video above for a sneak peak at the display.