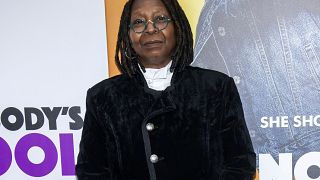 Goldberg has been co-host of the view for over a decade, during which time she has had her fair share of controversies   -  Copyright  Charles Sykes/AP
By Tim Gallagher  with AP  •  Updated: 02/02/2022

Whoopi Goldberg has been suspended as co-host of popular US daytime show 'The View' after controversial remarks she made during a conversation about the Holocaust.

The Oscar winner received backlash after she said the Holocaust was "not about race" in an episode on January 31.

Goldberg's comments were during a discussion about the recent ban of 'Maus' – a Pulitzer Prize-winning graphic novel about Nazi death camps – from a school district inTennessee.

The suspension, which will be in force for two weeks, came after the head of broadcaster ABC News called her comments "wrong and hurtful".

What did Whoopi Goldberg say?

Goldberg's comments came as part of a segment of the show dedicated to the censoring of literature in US schools.

“Let’s be truthful, the Holocaust isn’t about race, it’s not. It’s about man’s inhumanity to man, that’s what it’s about. These are two groups of white people,” she said in response to a co-presenter suggesting the censoring of Maus was rooted in white people not wanting to make themselves "look bad".

She continued on that line despite pushback from some of her fellow panellists.

"My words upset so many people, which was never my intention," Goldberg said on Tuesday morning.

"I understand why now and for that I am deeply, deeply grateful because the information I got was really helpful and helped me understand some different things."

"While Whoopi has apologised, I've asked her to take time to reflect and learn about the impact of her comments. The entire ABC News organisation stands in solidarity with our Jewish colleagues, friends, family and communities," ABC News President Kim Godwin said in a statement.

'Racism was central to Nazi ideology'

The flare-up over Goldberg's remarks this week highlighted the enduring complexity of discussing race-related issues as a public figure.

The day after their discussion of 'Maus', Jonathan Greenblatt, CEO of the Anti-Defamation League and author of 'It Could Happen Here' was brought onto 'The View' to discuss why Goldberg’s words had been hurtful.

"Jewish people at the moment are feeling besieged," Greenblatt said.

Rabbi Abraham Cooper, associate dean of the Simon Wiesenthal Center, praised Goldberg for being outspoken over the years on social issues but said he struggled to understand her statement on the Holocaust.

"Everything about Nazi Germany and about the targeting of the Jews and about the Holocaust was about race and racism. That's the unfortunate, unassailable historic fact," he said.

In Israel, being Jewish is rarely seen in racial terms, in part because of the country's great diversity. Yet Jewish identity goes far beyond religion. Israelis typically refer to the "Jewish people" or "Jewish nation," describing a group or civilization bound together by a shared history, culture, language and traditions and deep ties to Jewish communities overseas.

The US Holocaust Museum in Washington also released a tweet after the episode aired that many perceived to be directed at Goldberg.

Racism was central to Nazi ideology. Jews were not defined by religion, but by race. Nazi racist beliefs fueled genocide and mass murder. Learn more: https://t.co/GKmxkKppOm

"Racism was central to Nazi ideology. Jews were not defined by religion, but by race. Nazi racist beliefs fueled genocide and mass murder," it read.

That tweet also included a link to the museum's online encyclopedia, which said the Nazis attributed negative stereotypes about Jews to a biologically determined racial heritage.

Goldberg is no stranger to controversy in her time presenting the panel show.