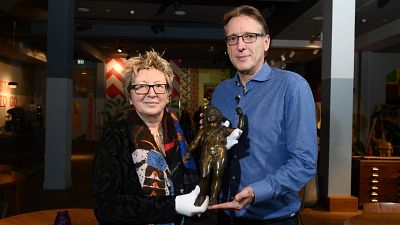 Arthur Brand handed back the bronze sculpture statue of the god Bacchus to the director of the Musee du Pays Chatillonnais in eastern France   -   Copyright  John Thys/AFP   -
By Shannon McDonagh  with AFP  •  Updated: 02/02/2022

A Dutch 'art detective' has returned a rare Roman statue, considered one of France's most important treasures, to the museum where it was stolen almost 50 years ago.

Arthur Brand, dubbed "the Indiana Jones of the art world", returned the 1st century bronze statue of the god Bacchus to the director of the Musée du Pays Châtillonnais, located in eastern France.

It was there, on a freezing December evening in 1973, that thieves smashed a window, found their way through the bars and stole the 15-inch tall statue of the god of wine.

"The criminals got away with some Roman antiquities, around 5,000 Roman coins -- but more importantly, the bronze statue of Bacchus as a child," explains Brand.

"The loss to the museum and the community was enormous. One of their most valuable antiquities was stolen," he adds.

Replaced by a copy

It was thought the art would disappear into the underworld and be "lost forever".

The director of the French museum – known for its collection of Roman artefacts from the nearby archaeological dig site of Vertillum, a Gallo-Roman village first excavated in 1846 – said she was very moved.

"When I discovered it, in her suitcase, I discovered how much more beautiful it was than the copy we had," recalls Catherine Monnet.

How was the statue found?

The statue resurfaced by pure chance two years ago when an Austrian client contacted Brand, who is famed for a number of high-profile art retrievals.

His success stories include a Picasso, Oscar Wilde's ring, and 'Hitler's Horses', life-size bronze sculptures that sat enthroned in the exterior of the chancellery in Berlin when the dictator occupied it.

He was asked to investigate a statue of a boy the client believed he had bought legally on the art market, but wanted to know more about its history.

“The hunt was on” to discover the truth, he explains.

After months of research, a photo of the statue in an archaeological magazine dated 1927 finally revealed a clue: the sculpture represents Bacchus as a child and belonged to a French museum.

An official police report that the statue was stolen on December 19, 1973 was linked soon after.

Shocked to learn that the piece really had been stolen, the Austrian client then demanded that it be returned to the museum.

Two British art collectors, Brett and Aaron Hammond, sponsored the return of the statue with a sum paid to the collector.

As for Arthur Brand, the museum confirms he has free entry for life, Monnet adds with a big smile.

Watch the video above to explore the journey that returned the statue back to France.