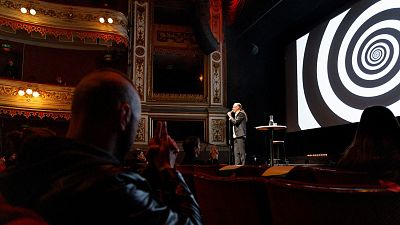 The largest film festival in Scandinavia is offering its spectators the opportunity to attend screenings under the influence of hypnosis.

The session takes place under the supervision of hypnotist Fredrik Praesto, and sensations ranging from heightened concentration to a state of stupor have been reported.

The avant-garde move has proven popular with filmgoers.

"We designed this hypnotic cinema to experiment around watching a movie, to challenge our ideas of how to watch a movie and see how the experience is affected when watching a movie differently," says Jonas Holmberg, director of the Gothenburg Film Festival.

The first session took place on January 30 in front of an audience of a few dozen.

'We enter a very pleasant state of mind'

Installed on stage in front of a large hypnotic spiral, Praesto begins with physical exercises, bringing his hands together as if they were magnets.

The spiral is then rapidly spun as the festival-goers are instructed to close their eyes.

After a count of 20 seconds, everyone opens their eyes again and the film begins. At the end of the film, another countdown of 10 seconds must break the hypnosis.

The sensations felt by the voluntary guinea pigs were broadly positive.

"We got rid of all the noises and distractions and with the sound we really got into the film," explains Jonna Blumborg, who was present for the first hypnosis.

"He told us – touch that, feel that, smell the smell of that."

"I tried to do the things he asked of us: to feel the textures of fabrics, skin, hair, etc. And it was easier to concentrate thanks to the atmosphere, the total darkness and just the light of the screen", says her friend Louise Nilsson.

For another, the experience evoked a welcoming daze.

"We enter a very pleasant state of mind," says Fredrik Sandsten. "It's hard to explain."

The hypnosis screenings mark one of a number of extraordinary experiences the Gothenburg Film Festival has achieved notoriety for.

Last year, to adapt to COVID-19 rules, the festival offered a week of screenings to one person, in a lighthouse on a desert island off the coast of Sweden.

Watch the video above to see the screening in action.