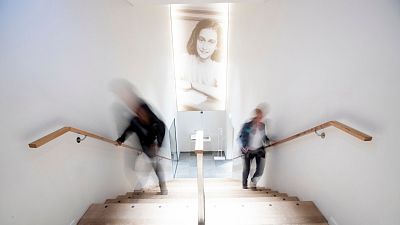 People walk up the stairs at the renovated Anne Frank House Museum in Amsterdam, Netherlands   -   Copyright  AP
By Shannon McDonagh  with Reuters  •  Updated: 31/01/2022

A book claiming to provide answers about discovery of Anne Frank in World War II has had its publishing suspended in the Netherlands after its research methods were called into question.

'The Betrayal of Anne Frank', released on January 18, caused a sensation when it named Jewish notary Arnold van den Bergh as the main suspect for disclosing Frank's hiding place.

The suspect was named following the discovery of an alleged unsigned note addressed to Frank's father, Otto, alleging that van den Bergh passed on the information of their whereabouts.

Experts have since criticised the six-year investigation's findings, saying they were "full of errors".

The publisher of the Dutch-language edition, Ambo Anthos, said in an internal email to its own authors on Monday morning that it should have taken a more "critical stance" on the publication.

"We await the answers from the researchers to the questions that have emerged and are delaying the decision to print another run," the email from the Amsterdam firm said.

"We offer our sincere apologies to anyone who might feel offended by the book."

It did not go into details on the questions and the firm declined to comment further when contacted.

There was no immediate response to requests for comment from representatives of the author, Rosemary Sullivan, or from the book's English-language publisher, HarperCollins.

One of the investigators quoted in the book, Pieter van Twisk, told Reuters he had seen the email and the research team was "completely surprised" by its message.

"We had a meeting last week with the editors and talked about the criticism and why we felt it could be deflected and agreed we would come with a detailed reaction later," he said.

The book detailed the conclusions of a six-year cold case investigation into the mystery of how the Nazis found the hiding place of the famous diarist in 1944.

Anne and seven other Jews were discovered by the Nazis on August 4 of that year, after they had hid for nearly two years in a secret annex above a canal-side warehouse in Amsterdam. All were deported and Anne died in the Bergen Belsen camp at age 15.

Her diary about life in hiding inspired millions of readers worldwide and has been translated into 60 languages.

A team that included a retired US FBI agent and around 20 historians, criminologists and data specialists identified Arnold van den Bergh, a relatively unknown figure, as a leading suspect in revealing the hideout.

Among those questioning the research are the foundation set up by Anne Frank's father, the Basel-based Anne Frank Fund, and historian Erik Somers of the Dutch NIOD institute for war, holocaust and genocide studies.