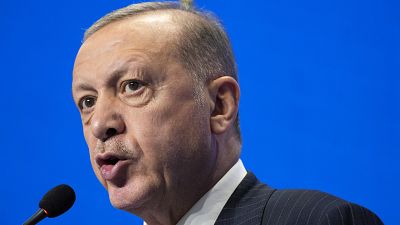 The announcement comes as a war rages over Turkish media output with authors and pop stars coming under attack   -   Copyright  Domenico Stinellis/AP
By Tim Gallagher  with AP  •  Updated: 31/01/2022

Turkey's president has ordered that steps be taken against TV programs and other media that are deemed contrary to Turkey's "fundamental values."

In a circular posted over the weekend, President Recep Tayyip Erdogan said the decision aims to eliminate the harmful effects of television programs with foreign content that have been adapted in Turkey.

The announcement follows the launch of Fox TV's Turkish adaptation of the international show 'The Masked Singer', where celebrities perform in costume to hide their identities. The show has been criticised online for alleged Satanic and pagan content.

The aim, according to the circular, will be to protect against productions that negatively affect the family, children and youth, through Turkish laws and the constitution. Young people will be protected from "messages conveyed through certain symbols," the decision stated, without elaborating what those messages or symbols might be.

Ilhan Tasci, a member of the media watchdog from the main opposition party, called the move "the censorship circular" and said it violates the constitution that promises to protect press freedom.

The majority of media companies in Turkey are already owned by businesses close to the conservative and nationalist government and closely follow government lines.

Reporters Without Borders ranks Turkey at 153 out of 180 countries in its World Press Freedom Index of 2021.

Freedom of Expression in Turkey

Since an attempted coup d'etat in 2016 there has been international outcry over perceived crackdowns on freedom of speech by the Turkish government.

At least 34 media employees are currently behind bars, according to Turkey's Journalists Union, and last week well-known journalist Sedef Kabas was arrested for insulting President Erdogan, after citing a proverb on Tele 1 television and social media referring to an ox.

Tens of thousands of people in Turkey have been prosecuted for allegedly insulting the president.

Earlier this month Popstar Sezen Aksu came under attack from Islamist groups affiliated with President Erdogan’s ruling Justice and Development Party (AKP) after lyrics considered to be offensive from her song 'Şahane Bir Şey Yaşamak' (It is a great thing to live) surfaced online.

In 2019 several writers including the celebrated author Elif Shafak were placed under criminal investigation for fictional passages about sexual violence and child abuse in their books.

Shafak has also previously been prosecuted for “insulting Turkishness”. In 2006 the author was taken to court a character in one of her books referred to the massacre of Armenians in the early 20th-century genocide.

Elsewhere in the region, Netflix's first Arabic movie has sparked intense debate in Egypt and other Middle East countries, with critics denouncing it as a threat to family and religious values that encourages homosexuality.

Others have rallied to the film's defence. They say detractors are in denial about what happens behind closed doors in real life and say that those who don't like the movie titled 'Ashab Wala A'azz', ('No Dearer Friends') can simply not subscribe to Netflix.

How much would you pay for a Spider-Man comic book?