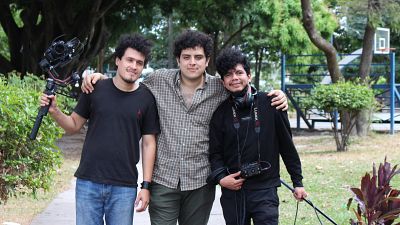 Victor Canacas is a visual artist. He has worked in animation and graphic design since high school but despite his education. He soon realised that there was no art space in El Salvador to develop his skills and earn a living from it. He sought to change that.

Speaking to his friend and poet Fabio Rivas, the two brainstormed and came up with a plan to create a collective where artists with a broad range of skills could collaborate and support each other.

Victor and Fabio were not the only ones in El Salvador who recognised the need for a culture centre. Momentum started to build as other young creatives joined them. Armando Rodríguez, a composer and sound designer; Emmy Bonilla, a painter; Isela Castillo, a fashion designer; and Rebeca Castro, an actress, make up the collective.

"It was by chance that we had the same taste, influences, conversations, dislikes, and that brought us together. Coinciding so much is scary sometimes, and when it happens, it is because something important is happening," declares Rebecca.

The need for artists to support themselves brought Astrálabe to life. In a short period of time, Astrálabe launched several events such as workshops, fashion shows and concerts to promote and sell their work.

"I had a vision of being able to set up my own tattoo studio, and they welcomed me with open arms," says Isela. "We've been doing activities, presenting exhibitions, concerts, there are 10 different workshops for which people can register," adds Fabio.

Despite its beautiful culture and warm people, the violent history of El Salvador makes life challenging for its citizens. The country is still struggling from the effects of civil war and is rife with gang-related problems.

"Being an artist in a country as violent as El Salvador requires great responsibility and has its pros and cons because, on the one hand, there are many things to talk about, but there are also many limitations that can make us explore our expressiveness," says Armando.

Despite so much death and injustice, many positive things are taking place, according to Fabio.

"Because neither tyranny nor stupidity stops, then why should we?" This is the motto that motivates them to create pieces that impact those they're in contact with and by doing so, young Salvadoreans gain new perspectives on art.

Astrálabe is committed to playing a pivotal role in its country's cultural revolution.

"Every time there are more musical bands, there are more creative groups, more people making independent movements, people who defend human rights and in general, the rights of nature and life. So I think that's part of what we should focus on," highlights Fabio.