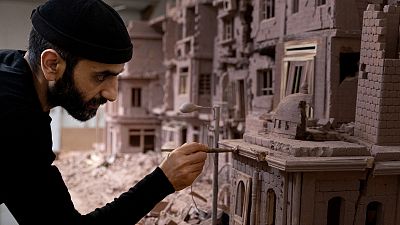 In the heart of the French capital, Syrian artist and prison survivor Khaled Dawwa puts the finishing touches on one of his bronze sculptures.

Exiled in France since 2014 after fleeing his war-torn country and spending a year in Lebanon, Dawwa tells the story of the destruction of his country through art.

One of the his most-striking creations represents the ruins of the Syrian neighbourhood of Ghouta, in the suburbs of Damascus, targeted by regime bombing, with bodies and broken toys poking out of the rubble and tall, grey buildings being reduced to crumbling, empty shells, their walls blown away or pockmarked by the blast.

"When I'm working on this piece in my studio, I'm in Damascus. I do everything I can here, while not being there," shared the 36-year-old.

"As an artist, I feel the responsibility to use art since I have the tools to express myself, unlike the others. On this project, I tried, first of all, to focus on the lives of the people who were there, on their lives, their daily lives, their memories, and what a massacred neighbourhood looks like. I wanted to bring a piece of Syria back with me to really show what is going on right now."

Deeply scarred by the years of repressive rule and violent crackdowns and the loss of friends killed, missing, or imprisoned, Dawwa's work is both an act of revolt and memory, targeting "the international community's inaction against dictatorial regimes" in Syria and elsewhere.

In his colossal work entitled 'Here is my heart!', the Syrian artist is still battling oppression, urging viewers "not to forget the revolution by the Syrian people and all their sacrifices".

"Everything is imagined here but also in the houses, there are photos. We see real people who died either in the regime's prisons or were massacred. These are friends and people whose stories I knew. For example, one of these people was Ali Mustafa, he was a friend I have known since I was a child and he has been a prisoner of the regime for 8 years now and nobody knows where he is."

Dawwa began the piece in 2018, as regime forces retook the neighbourhood.

At nearly six metres long and more than two metres high, it is imposing.

Using polystyrene, earth, glue, and wood, covered in clay, he details the destruction inside and out — the shattered doors, blown-away balconies, right down to the overturned chairs.

In the debris, crunched-up bicycles and the wreckage of a bus can be seen — but also the bodies of a child lying next to his ball and of an old woman.

"It's totally unique and innovative," said philosopher Guillaume de Vaulx, of the French Institute for the Near East (Ifpo) and co-author of 'Destructiveness in Works. Essay on Contemporary Syrian Art'.

"Artists have shown destroyed things and made it their art, but he shows the process of destruction from within," de Vaulx added.

"He stops before the form has totally disappeared but the viewer is inevitably led to imagine the moment when everything will crumble."

'They broke the memories in my head'

Themes pitting people against authority dominate the works of Dawwa, who graduated from Damascus' School of Fine Arts.

From the onset, he took part in the nationwide anti-government protests that began in 2011, before joining other artists and activists to set up an independent cultural centre in Damascus, initiated by Syrian actor Fares Helou.

Despite police pressure, Dawwa continued to demonstrate and work at the centre for three years. By 2013, he was practically the only one left there.

"My battle was to not abandon the project, otherwise it was as if we were giving up hope," he said.

It was during that period he came to understand the impact his sculptures could have.

Posting a photo of his work on Facebook, he was surprised to see it shared hundreds of times.

Although risky, he continued to create and post pictures, but then destroyed the sculptures "in order to leave no trace", he explained.

Then, in May 2013, he was seriously wounded in his studio by shrapnel and, on leaving the hospital, he was jailed, spending two months in various prisons.

"There were thousands of people. Every day, at least 10 would die," he revealed. "Their bodies would stay for two days next to us, no one removed them from the cell... on purpose."

Of the horror of the experience which still gives him nightmares, he says: "They broke the memories in my head."

After his release, he was forced into the army but escaped beforehand, fleeing to Lebanon, then to France in 2014 where he was granted refugee status.

His street-scene artwork, he says, is an attempt to convey "all that is no longer there; families, memories".

The Syria conflict, which broke out in 2011, has killed close to half a million people and spurred the largest conflict-induced displacement since World War II.

Veronique Pieyre de Mandiargues, a founding member of France's 'Portes Ouvertes Sur l'Art' association, which supports artists in exile, said Dawwa "wanted to create a fixed image of what was happening in Syria so that it remains in our memories".

Among several of Dawwa's massive installations — including his bronze sculpture — being exhibited for the first time this year in France, 'Here is my heart!' has been on display in his workshop in Vanves, on the outskirts of Paris, and is being considered for transfer to a big national museum.