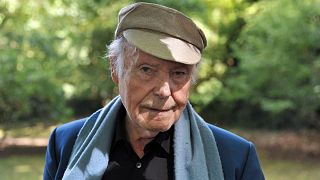 The writer, poet and playwright René de Obaldia – regarded by many as the "guardian" of the French language – died on January 27 at the age of 103.

A prisoner during the Second World War, Obaldia flourished as a jack-of-all-trades writer, revered for his biting humour and cultivating detachment.

The news broke via the French Academy, of which he was the dean and an elected member since 1999.

During his acceptance speech at the Academy in 2000, he admitted to himself "often at odds with reality; a reality for which, I admit it, I harbor a strong suspicion."

The circumstances of his death have not yet been made public.

'To become a centenarian, you have to start young'

Born in 1918 in Hong Kong, he spent the majority of his life in Paris as one of France's most produced playwrights. His works have been translated into 28 languages across the globe.

Son of a Frenchwoman and a Panamanian diplomat in the Chinese city under British control, he did not know his father, whom his mother quickly left after his birth to return to France.

Obaldia's last publication came shortly before reaching his 100th birthday – 'Perles de vie' ('Pearls of Life'), where he noted the proverb: "To become a centenarian, you have to start young".

"Our wonderful, ever-alert centenarian has just left us. It's a huge loss for the Academy and infinite pain for me," says Hélène Carrère d'Encausse, Perpetual Secretary of the Academy.

Fellow French writer Philippe Labro praised his legacy on Twitter, describing "the indefinable charm of one who has loved, lived, understood".

"I have always had this derisory side to me, which allowed me to put certain things at a distance", declared Obaldia to L'Express in 2009.

His work earned him worldwide fame, with plays such as 'Du vent dans the branches of sassafras', 'Monsieur Klebs and Rozalie', and 'La Rue Obaldia'.

Alexandre Giorgini, Consul General of France in Obaldia's native Hong Kong, wrote that he dedicated his life to "poetry, humour and elegance".

#Literature : 🇨🇵 poet and member of the Académie Française René de #Obaldia passed away. Our deepest condolences from #HongKong, the city where he was born 103 years ago, on 22 Oct. 1918. He dedicated his life to poetry, humour and elegance. pic.twitter.com/858nZNdFZZ

Like a number of other writers and artists, he became politically involved in 1978 against the communist bloc during the creation of the Committee of Intellectuals for Europe of Freedoms, behind the philosopher Raymond Aron.

The death of René de Obaldia leaves vacant six of the 40 seats at the Académie Française – the principal French council for matters pertaining to the French language.

One of them must be filled in an election scheduled for 17 February.

The Academy is reported to be is experiencing notorious difficulty in allocating these seats, for lack of valid candidates.

It elected 85-year-old Mario Vargas Llosa to its ranks in November, despite the Peruvian-Spanish writer exceeding the admissible age limit by ten years.