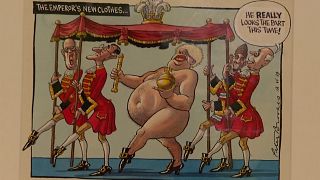 Political cartoons have been used since the 18th century in order to question authority and draw attention to corruption, political violence and other social issues   -  Copyright  AP Photo
By Theo Farrant  & AP  •  Updated: 27/01/2022

With his unkempt blonde hair and clown-like antics, British Prime Minister Boris Johnson has often been a target for political cartoonists.

And right now he's keeping them particularly busy following numerous allegations of parties at his Downing Street residence being in breach of coronavirus restrictions over the course of 2020 and 2021.

With the prime minister proclaiming he didn't know some of the gatherings were against the COVID-19 lockdown rules, Johnson has opened himself up to much ridicule.

Martin Rowson is a political cartoonist for the Guardian and Daily Mirror newspapers.

One of his works shows Queen Elizabeth II wearing a gas mask to protect herself from the rotten smell of the Tory government and Johnson drowning in a swamp behind.

It was inspired by photographs of the monarch sitting alone wearing a black face mask at her late husband Prince Philip's funeral in April 2021, the day after government staff are alleged to have held a party.

As the stories and allegations over the Downing Street gathering continue to emerge, Rowson finds his cartoon ideas quickly get out of date.

"Now it is unfolding so quickly and it takes me 4 or 5 hours to produce one of these full colour cartoons for the Guardian and by the time I file the story might have completely changed so I've always got to put a gap in it to put in some last-minute breaking news story," says Rowson.

"No cartoonist is going to die poor"

But the museum's learning coordinator Steve Marchant said Johnson, in particular, was a "gift" for cartoonists.

"All you have to do is draw an egg with some straw on top you've got Boris before you even attempt to draw the face," explains Marchant.

And it's not just cartoons that are being used to criticise and ridicule Johnson.

Oliver Knowles is a member of a group called Led by Donkeys who have conducted multiple stunts, including a spoof video of the prime minister being grilled by detectives for holding illegal parties.

The video has used clips from BBC drama Line of Duty where a detective unit investigates corruption in the police, but instead, it is Johnson being questioned.

The scandal over the series of allegations over lockdown-breaching parties at Downing Street, which is now being investigated by London's Metropolitan Police, has rumbled on over weeks of discontent in Britain.

The prime minister is awaiting the results of a probe by a senior civil servant expected to be published this week, which could have serious implications for his time in office.