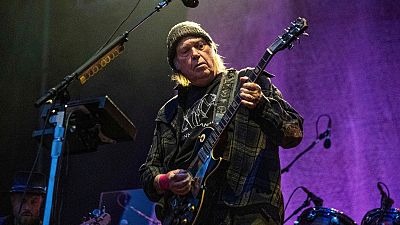 Neil Young's music will be removed from Spotify at his request, following the veteran rock star's protest over the streaming service’s hosting of Joe Rogan’s podcast, 'The Joe Rogan Experience'.

The singer threatened to remove his music from the platform in a now-deleted open letter accusing Spotify of “spreading false information” about the COVID-19 vaccine by hosting Rogan's material.

Spotify responded shortly afterwards, saying that it regretted Young's decision, "but hope to welcome him back soon."

Young had asked his management and record company publicly on January 24 to remove his music from the popular streaming service, where he has more than six million monthly listeners.

"I realised I could not continue to support Spotify's life-threatening misinformation to the music loving people," he said.

It is not immediately clear when his music will conclusively be taken off the service.

What conspiracies have been on Joe Rogan's podcast?

Rogan’s podcast featured an interview, uploaded on New Year's Eve with Dr. Robert Malone, an infectious disease specialist who has become a hero in the anti-vaccine community.

Youtube removed the unofficial video copy of the episode shortly afterwards when Dr. Malone made comparisons between the vaccine and "mass psychosis".

Malone has also been banned from Twitter for spreading COVID misinformation and has falsely suggested that millions of people have been hypnotised into believing that the vaccines work to prevent serious disease.

Spotify said in a statement January 27 that they have "detailed content policies in place and we've removed over 20,000 podcast episodes related to COVID-19 since the start of the pandemic."

The company says it has a team of experts that reviews content, and it's removed if the information presented can cause harm or pose a direct threat to public health. False suggestions that injecting bleach could fight the virus, that COVID-19 wasn't real or that vaccines could be deadly were among those removed from the platform.

Spotify would not comment on Rogan's podcast, which airs exclusively on the platform after striking a reported $100 million (€89.5 million) deal in 2020.

What did Young say in his statement?

Young said that many of Spotify's listeners are hearing misleading information about COVID, claiming users were, "impressionable and easy to swing to the wrong side of the truth," he said.

"They unfortunately are wrong. I knew I had to try to point that out."

He said he appreciated his record company, Warner Brothers, standing behind him, since Spotify is responsible for 60 percent of his music being streamed all over the world.

He said it was "a huge loss for my record company to absorb."

76-year-old Young was inducted into The Rock and Roll Hall of Fame in 1975.

He's the composer of such hits as 'Heart of Gold,' 'Harvest Moon' and 'Keep on Rockin' in the Free World.'

An audiophile, Young said his fans now have the chance to listen to his music in places where it will sound better.