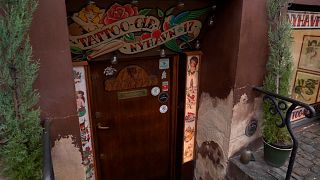 After recently surviving the threat of closure following an eviction notice from its landlord in 2016, Tattoo Ole is now facing a new challenge - new European Union rules, implemented in early January, have banned thousands of chemicals in tattoo ink.

The legacy of Tattoo Ole

Toughened sailors, prostitutes, even one Danish king, have been inked here. Its history goes back to 1884 when a tattoo was performed in its cramped basement.

Current boss Majbritt Petersen, who took over in 2010 as the shop's first female owner, maintains the pokey parlour's history while changing with the times.

There's no waiting list, people can still walk in off the street and get inked.

"We have grandparents coming in with their grandkids for their first tattoo because it's memorable, we also do have people in up to 90 years old who come by and they got tattooed here when they were young," says Petersen.

"We also always followed style, so we are a shop who is evolving, but still keeping all of the old customs."

What does the EU ink ban mean for Tattoo Ole?

The 27-nation bloc says public health will be much better served with tougher restrictions on elements in ink that may cause cancer or allergies.

The Commission says alternatives to the banned products do exist, but tattoo parlours say they're too slow to make their way from the manufacturers to their shops.

Weeks into the new ban, Petersen is still working just with black ink.

"All the colours have changed, so we have a new black, we're getting a new white, they're coming new colours, but you don't know how they're going to stick in the skin in the long run" she says.

"We have (made) the change, so right now, we only have black colours."

An avoidable crisis for the tattoo industry

Like many in the industry, Petersen says the new ban is not sufficiently backed by science, something the EU disputes.

A 'Save the Pigments' petition collected over 176,000 signatures in the EU.

It's already causing confusion and uncertainty among potential clients, says the parlour owner.

"If the customers are scared and think; 'Okay, I don't want to be like testing a new colour, I really want the old colour.' It's a new colour on the market and you want to have a permanent tattoo forever," she says.

"It's a lot of changes in a small time," she adds.

Tattoo shops in the 27-nation bloc have had a rough two years since COVID-19 hit, with restrictions and lockdowns.

They now say a perfectly avoidable crisis is hitting them even harder.

Petersen is still inking clients at Tattoo Ole, but - for now - its colourful history has lost just a little bit of its vibrancy.

What is it like to get your eyeball tattooed?