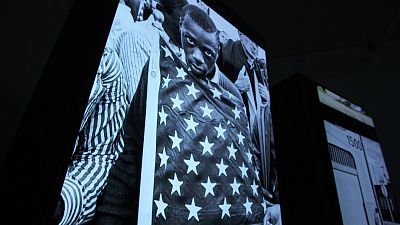 A new exhibition at London's Saatchi Gallery is documenting decades of political, social and cultural change in the US.

‘America in Crisis’ is born out of a 1960s photography concept of the same name. One which explored the American Dream versus reality - at a time of big change and division. Five decades on, the exhibition takes photos from that era juxtaposing them with contemporary images.

"In 1968, Charles Harbutt and Lee Jones, Magnum Photos Bureau Chief at that time, conceived an original project, America in Crisis, to look at the events that were happening on the streets of America in that year, in the lead up to Nixon’s election in 1969," explains the exhibition's curator Sophie Wright.

“In May 2020, it became apparent there was going to be another tumultuous year in the lead up to another election and it seemed very appropriate to take this strong framework, and to readdress that with contemporary photography,” she adds.

Featuring the work of 40 leading American photographers the exhibition examines the global fallout of recent events, such as last year's violent riot at the US Capitol when Donald Trump supporters stormed the building.

‘America in Crisis’ also tackles racial inequality, an issue at the heart of the Black Lives Matter movement.

Zora J Murff's work is among the exhibits.

“When I talk about it, I say it’s about different modes of anti-black oppression, how it’s evolved through very specific phenomena. Spectacle lynching, police murder of black people and red lining – government endorsed segregation,” Murff says.

‘America in Crisis’ hones in on other, fierce US national debates such as gun control, as well as topics like the climate crisis, the digital revolution and image consumption.

“For [the] Saatchi gallery, it’s incredibly important to keep providing a platform to photography, especially at a time where current affairs and every day news is so heavily influenced by imagery,” says Saatchi Gallery's Director of Partnerships, Laura Uccello.

‘America in Crisis,’ organised by the Saatchi Gallery, runs from 21 January to 3 April 2022. The exhibition is curated by Sophie Wright, Gregory Harris from Atlanta’s High Museum of Art, and academic Tara Pixley.