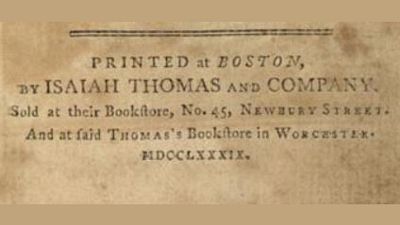 The year 1789 has very powerful reverberations in Europe, but few mark January 21st of that year as a significant anniversary.

But it is, in fact, something of a landmark.

The Power of Sympathy: or, The Triumph of Nature by William Hill Brown was the very first novel to be printed in the United States.

Epistolary novels (written in the form of correspondence) were en vogue at the time, following on from Samuel Richardson's famous work, 'Clarissa', and Brown's novel was one such example.

According to various scholarly studies in North America, Brown's book touched a nerve in the local community. Its subject matter was closely aligned to a real-life scandal, and because of this, the novel was withdrawn from sale.

European novels, obviously, were published way before this, and non-literary books were published using moveable types in Asia even before that. The earliest examples were in China in the ninth century.