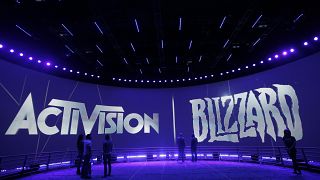 Tech giant Microsoft has taken over the gaming company that makes Candy Crush and Call of Duty in a massive €61 billion buyout.

The sale of Activision Blizzard to Microsoft will make the software producer a larger video-game company than Nintendo and raises questions about the deal's possible anti-competitive effects.

Microsoft, who already make the Xbox system, is now in a better position to compete with tech rivals such as Meta, formerly Facebook, in creating immersive virtual worlds for both work and play.

If the deal survives scrutiny from U.S. and European regulators in the coming months, it could be one of the biggest tech acquisitions in history.

Dell bought data-storage company EMC in 2016 for around €52 billion.

Activision under siege as Microsoft consolidates

Activision has been buffeted for months by allegations of misconduct and unequal pay. Microsoft CEO Satya Nadella addressed the issue Tuesday in a conference call with investors.

"The culture of our organisation is my No. 1 priority," Nadella said, adding that "it's critical for Activision Blizzard to drive forward" on its commitments to improve its workplace culture.

Activision disclosed last year it was being investigated by the Securities and Exchange Commission over complaints of workplace discrimination and in September settled claims brought by U.S. workforce discrimination regulators. California's civil rights agency sued the Santa Monica-based company in July, citing a "frat boy" culture that had become a "breeding ground for harassment and discrimination against women."

Wall Street saw the acquisition as a big win for Activision Blizzard Inc. and its shares soared 25% in trading Tuesday, making up for losses over the past six months since California's discrimination lawsuit was filed. Shares of Microsoft slipped about 2%.

What do the industry and regulators say?

The Redmond, Washington, tech giant said the latest acquisitions will help beef up its Xbox Game Pass game subscription service while also accelerating its ambitions for the metaverse, a collection of virtual worlds envisioned as the next generation of the internet.

While Xbox already has its own game-making studio, the prospect of Microsoft controlling so much game content raised questions about whether the company could restrict Activision games from competing consoles, although Nadella promised the deal would help people play games "wherever, whenever and however they want."

The acquisition would push Microsoft past Nintendo as the third-largest video game company by global revenue, behind Playstation-maker Sony and Chinese tech giant Tencent, according to Wedbush Securities analyst Daniel Ives.

"Microsoft needed to do an aggressive deal given their streaming ambitions and metaverse strategy," Ives said. "They're the only game in town that can do a deal of this size with the other tech stalwarts under massive tech scrutiny."

Meta, Google, Amazon, and Apple have all attracted increasing attention from antitrust regulators in the U.S. and Europe, but the Activision deal is so big that it will also likely put Microsoft into the regulatory spotlight, Ives said.

Microsoft is already facing delays in its planned €14 billion acquisition of Massachusetts speech recognition company Nuance because of an investigation by British antitrust regulators.