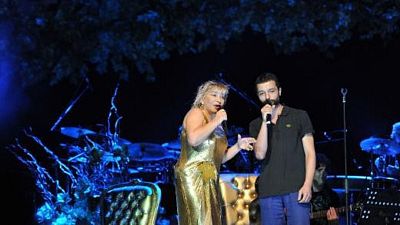 Aksu is a popular artist in Turkey where the arts and government often find themselves at odds   -   Copyright  Lubunya/Wiki Creative Commons
By Tim Gallagher  •  Updated: 18/01/2022

A Turkish musician is being targeted by Islamist groups in the country who’ve accused her of “attacking” their values with the lyrics to her music.

Popstar Sezen Aksu, who has not yet commented on the controversy, is one of Turkey’s biggest pop divas with over 40 million album sales worldwide.

The controversy began two weeks ago when Aksu shared a clip of her 2017 track "Şahane Bir Şey Yaşamak" (It is a great thing to live) on her social media accounts, according to Turkish outlet, Duvar English.

One of the lines, “Say hello to those ignorant Eve and Adam,” caused offence to the National Survival Movement, which is known to be closely connected with President Erdogan’s ruling Justice and Development Party (AKP).

In response the group organised a protest outside of Ms Aksu’s home, to take place on Monday 17th January at 8:30pm.

As the outrage about the lyrics gained traction on social media, an AKP MP, Mustafa Açıkgöz tweeted Aksu, saying: “Enough! Stop your attacks on our values under the guise of art and music, 'You're Out of Fashion', our society is tired of people like you!"

Since an attempted coup in 2016, the Turkish government has been accused of cracking down on freedom of expression. In 2020, NGO PEN listed the country as the third worst nation in the world for imprisoning writers after China and Saudi Arabia.

Religious leader Ahmet Mahmut Ünlü also criticised the musician, tweeting: “Those who are so low as to call the first father and the first prophet of humankind, Adam, and his wife and our mother Eve, as ignorant [...] is the most famous and favourite artist of the society today.

“This criterion is sufficient to understand whether Allah is pleased with this society or not.”

In response many artists have spoken out in support of Aksu, with the hashtag #sezenaksuyalnızdeğildir (Sezen Aksu is not alone) trending on Twitter.

In a more serious turn of events for the pop singer, a group in Ankara filed a criminal complaint against her for "insulting religious values."

As recently as 2019 authors in Turkey, including Elif Shafak, were investigated by prosecutors for writing about sexual violence and child abuse in their books. The move was criticised as government censorship at the time, with PEN pointing out a clause in the Turkish constitution allows for such prosecutions to take place.

Shafak had previously been tried and acquitted in 2006 for “insulting Turkishness” when a character in her book “The Bastard of Istanbul” referred to the mass-killing of Armenians in World War One as a 'genocide'.

In a written statement Turkey's Presidency of Religious Affairs (Diyanet) weighed in on the controversy, without directly criticising Aksu.

“The careless attitude towards religious figures is disrespectful to say the least,” read the statement.

"Regardless of its purpose, intention and context, it is necessary to be extremely sensitive and careful in every sentence, statement and approach made about the distinguished, leading and exemplary figures of Islam".