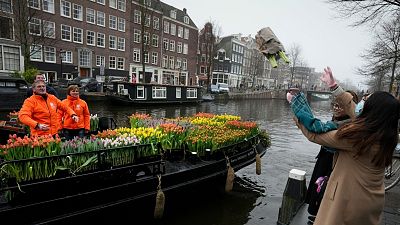 The vessel meandered through Amsterdam's waterways, handing out free bouquets to members of the public   -   Copyright  AP Photo
By Theo Farrant  & AP  •  Updated: 18/01/2022

Tulips on a canal boat: what could be more Dutch?

The start of the tulip growing season was marked in the Netherlands with a giveaway of thousands of bouquets.

Tulips - a symbol of The Netherlands

The event is held each year to celebrate the start of the growing season for the iconic flowers, a major export product for Dutch farmers.

Normally, organisers set up a flower garden in front of the royal palace on the central Dam Square.

But that would attract crowds, and large public gatherings are still restricted here due to COVID.

"The tulip is a very popular product. You can see them in many different colors and that's the reason. And it is also not a very expensive flower for the people. When they buy for around 3-5 euro, you have every week a very nice bouquet on your table," says Arjan Smit, chairman of the Tulip Promotion Netherlands.

Andre van Duin, a comedian and TV star, was onboard, helping to give out thousands of bouquets.

Some bouquets were thrown to delighted recipients on one of the city's many bridges, while other tulips were passed with a telescopic fishing net. Both good ways to stick to social distancing rules.

Check out the video above to see the tulip giveaway