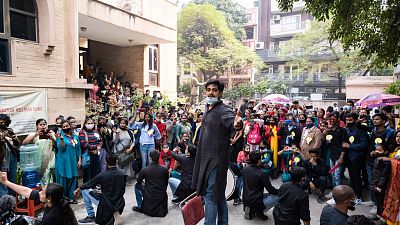 Large crowds huddle on the streets of New Delhi. They have come from all over the city to watch and listen to this group of street actors. "They are here, they are here," screams an artist. "The street actors are here," join the others. The young group is part of the Sukhmanch Theatre, which organises street performances as a form of activism.

Theatre is an ancient practice in India. It is deeply rooted in a culture that dates back 5,000 years. Street theatre, popularly known as 'nukkad natak', is performed in public spaces as a platform to make people aware of social issues. During the 1980s, its popularity increased significantly, which encouraged political parties and big companies to use 'nukkad' for their own publicity.

The art form usually has a tinge of everything - humour, political satire and music. "It's totally unfiltered content," says Divyakshi Jain, an actor at Sukhmanch Theatre. "It goes through stages of creation. It's given that dramatic punch, maybe some elements of emotion, comedy; then we start with the improvisations," he adds.

Sukhmanch Theatre has completed more than 2,000 street theatre shows across India. Their performances shine a light on gender inequality, child marriage and human trafficking. "Sometimes, the audience falls silent. There are a few moments after the 'nukkad', I cannot speak, they cannot speak. Most of them are crying, many of them are in shock or anger," explains Sukhmanch Theatre's founder, Shilpi Marwaha.

The unique art form reaches large audiences by breaking down traditional theatre barriers. 'Nukkad' literally means street corner, something the performing group has taken to heart. "From a multi-starred hotel in Gurgaon to the slums of Seelampu, we have performed everywhere," says Gaurav Dubey, one of the actors.

Putting on a show in a public space offers scope to engage with people directly. "Sometimes something comes up in the middle of the 'nukkad', so we pause, do a light discussion in between and then start again," explains Shilpi.

As with any other form of activism, the street actors have faced some challenges. "This one time we were performing, and afterwards we went for individual discussions. The discussion became very serious there. People kept saying that we were spoiling their girls, teaching them bad things," remembers Shilpi.

But street performances have also given the team the language to connect with people. “I cannot totally disregard their beliefs," Divyakshi says. "I have to give them a logic, maybe from their own understanding, which theatre showed me," she adds.

A voice for the voiceless

Street theatre has given a voice to everyone across India. "'Nukkad natak' is a very participatory process, and I think that is the beauty of it because that gives it a scope of having people's voices or diverse voices," says Divyashi. "I discovered myself, and I discovered my own thought processes," adds Pareekshit, an actor at the theatre.

The actors collaborate during workshops and rehearsals, discussing different ideas and making sure they speak out on topics they believe in and question the principles that have been followed for centuries by society.

"What I realised further was that I cannot be seeing art just as a medium. As an end of a social cause. Art, theatre in itself, is also an end. It itself is a cause. It cannot just work for a cause. It is the cause," explains Divyashi.

Sukhmanch Theatre's objective is clear: to speak out against injustice for a better world. The actors know there is no basic formula or path to their mission. They adjust their performances to each situation, atmosphere and place to bring about social change in India. "Even if one person changes, society starts changing," says Pareekshit.