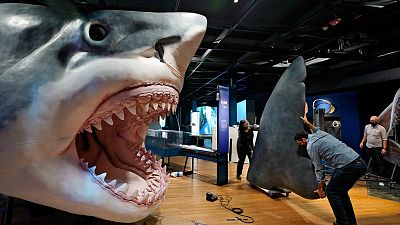 Are sharks getting a bad rep that they don't really deserve? Most people think of them as deadly predators when on average only 77 attacks take place every year worldwide.

Lauri Halderman, vice president for exhibition at New York's American Museum of Natural History, says the species that has been around for more than 450 million years is clearly misunderstood.

She created the temporary exhibition 'Sharks' in their honour, to separate fact from fiction.

"They got their mouths open and a lot of big, sharp teeth, and they look like they're coming right at you. And sure, that's true of some sharks. But sharks don't really hardly ever attack people. They're just not that into you. And in reality, we fish and catch tens of millions of sharks every year. So we're a much bigger threat to them than they are to us," Halderman revealed.

The exhibit, which opened last month, has life-sized models of different species to offer visitors a real-life perspective on size.

"It's a real life-size model. That big shark is a megalodon. It's extinct now, but it was the largest predatory fish that ever lived. And elsewhere in the prey, we have the whale shark that is around today. It's the largest fish alive today, but it's not a predator. It feeds on zooplankton and smaller organisms, so it has teeny, tiny teeth. You don't even see it, and it's a filter feeder," she explained.

Sharks are known for their massive size but there are a few within the group that are not as big as the public might think.

"We have some really enormous sharks but there are also sharks that are surprising because they are so small. There are a couple of sharks that you could hold in the palm of your hand and some of them, some of the sharks also glow. There are bioluminescent sharks and also fluorescent sharks. So there's just some really surprising things that most of us never knew about sharks," she went on.

The museum wanted to offer families a chance to engage with the exhibit. However, the staff knew that they had to make changes due to the COVID-19 pandemic.

"We use these sensors that you just wave your hands on top of them and it activates the exhibit. We even have one that allows you to hunt like a hammerhead, and it uses ultrasonic sound waves that you can feel on your hand. It's almost a metaphor for how hammerhead sharks hunt, which is by electro sensing," Halderman added.