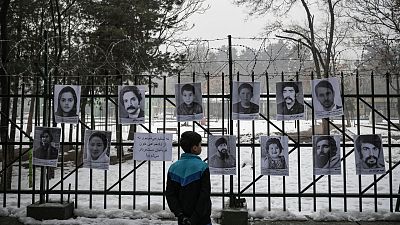 More than 1,000 portrait photographs of war victims, spanning over 40 years of conflict in the country, were displayed on a park fence in Kabul over the weekend.

"We're displaying photos from the era of Khalq and Parcham, from the Taliban times and then from the last 20 years of American rule," explained Vida the head of the SAAJS.

A call for global action

The members of the SAAJS said that they want the governments in charge of Afghanistan to be held responsible for the atrocities of war, and they want to seek justice for the families of the victims.

"We want our people and organisations working abroad to amplify our people's voices, not to let them walk alone, and not allow more crimes to be committed in Afghanistan," said the head of the SAAJS.

The SAAJS said that they had collected more than 12,000 photos from all over the country, but they only exhibited 1,000 of them.

The Taliban later ordered the photos taken down because the organisation did not have the proper authorisations to exhibit the works.

Golden Globes winners and nominees celebrate, but only on social media