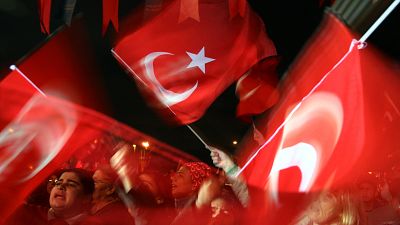 A new slogan, a new mascot or even a new shade of colour in the flag - these are just some of the ways countries try to rebrand themselves on the international stage.

But a change of spelling? That is quite unusual.

He wants to change how his country Turkey - or should we say, Türkiye - is seen in the minds of tourists, businesses, and governments across the world.

This follows a mandate by Erdogan in December 2021 that the phrase 'Made in Türkiye' be displayed on Turkish exports, alongside the use of 'Türkiye' in documents at government ministries.

But what is behind the move? Is it part of a cultural revival or is something else at play?

Erdogan has long sought that the internationally recognised name 'Turkey' be changed to 'Türkiye', as it is spelt and pronounced in Turkish.

In a December statement, the Turkish government said the rebrand was to "preserve and glorify the culture and values ​​of our nation."

Turkey's English-language state broadcaster TRT World has officially switched to using 'Türkiye', although the word 'Turkey' occasionally slips from presenters who are still not used to the change.

It argued that Turks prefer their country to be called 'Türkiye', in “keeping with the country’s aims of determining how others should identify it.”

The country called itself Türkiye in 1923, following its declaration of independence.

Tourism is one of the first sectors to see the active rebrand, with Turkey's official site for foreign visitors now being known as GoTürkiye.com.

In a bid to promote its name change, the Turkish government released a promotional video in English earlier in 2022.

The video shows tourists from the United States (US) and Asia saying "Hello Türkiye" at famous destinations inside the country.

Turkey in the room?

But the elephant in the room appears to be the other associated meaning of the word Turkey. That's right. Gobble, gobble. The turkey bird.

Turkey has said that it wants to avoid what it deems negative and unflattering associations with the large bird.

First things first. Which turkey came first - the bird or the country?

Although native to the US, turkey was named after the country Turkey because it resembled another bird nicknamed Turkey-hen, that was exported from eastern Africa via the Ottoman Empire to Europe, the guinea fowl.

Back in Ottoman times, Europeans called guinea fowl 'turkey-hens', because they were imported from the land of the Turks. And since they looked similar, imported Turkeys from North America were labelled as Turkeys out of sheer familiarity.

Alongside better reflecting Turkish culture and values, Ankara wants to dispel some of the negative associations with the turkey.

TRT World explained why in a 2021 article.

Googling 'Turkey' brings up an “a muddled set of images, articles, and dictionary definitions that conflate the country with Meleagris – otherwise known as the turkey, a large bird native to North America – which is famous for being served on Christmas menus or at Thanksgiving dinners,” it said.

“Flip through the Cambridge Dictionary and “turkey” is defined as “something that fails badly” or “a stupid or silly person,” the network added.

A UN spokesperson confirmed the rebrand had become effective "from the moment" the request was received, according to the Turkish news agency Anadolu.

However, it is not clear whether the name, which contains a letter that doesn’t exist in the English alphabet, will catch on abroad.

In 2016, the Czech Republic officially registered its short-form name, Czechia, and while some international institutions use it, many still refer to the country by its longer name.