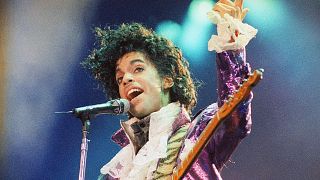 A rare promo tape of Prince‘s ‘The Black Album’ is up for sale.

Originally intended for release in 1987, the late legend requested the LP be pulled days before its release because he thought it was "evil", and it was subsequently replaced with the record, 'Lovesexy'.

However, 'The Black Album' would eventually be released in 1994, by Warner Bros. Records, despite 500,000 copies being destroyed at the request of the music legend.

The singer hated the album so much that the lead music video for 'Lovesexy', 'Alphabet St', features an on-screen message that reads: "Don't buy The Black Album, I'm sorry."

RR Auction house is selling the cassette and claims there are "quite possibly" only two copies in existence.

Three vinyl copies of the record previously sold for upwards of €18,000 each.

Prince's estate is in the thick of an inheritance battle

Meanwhile, next month court proceedings will take place to establish the exact worth of the 'Raspberry Beret' singer's estate.

According to tax filings from November, it's estimated to total in excess of €90 million.

Prince – who died of a fentanyl overdose at his Paisley Park home in April 2016 aged 57 – didn't write a will before his passing, which means the case has gone to probate.

In January 2021, the IRS reportedly sought an additional €28.6 million in taxes from Prince's estate after they found his assets were worth more than first assessed – more than double the original bill.

Prince's siblings had claimed they had yet to receive any money from his estate.

His sisters Sharon and Norrine and brother John Nelson – the latter of whom died last year – filed a legal claim seeking "payment for services and efforts provided to the estate", claiming and they had spent "considerable time and investment in business matters" relating to it.

They also alleged that although they have not received any money, others have been paid "millions".

The court documents added that they have had to rely "solely on their pension, social security, personal savings and loans from friends to cover the costs needed to support the Prince Estate despite the millions paid to advisors, attorneys and others approved by the Court.

"As this Court is aware, the Estate has now been ongoing for over three years. In this time, millions have been paid to the Personal Representatives, their accountants, attorneys, and legal advisors."

Bidding for The Black Album’ ends on January 13.