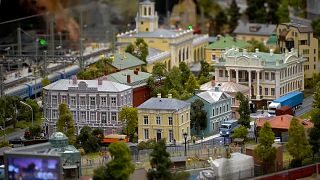 Russia's historic landmarks may be hundreds, if not thousands of miles apart, but now as if by magic it's possible to visit them all at once.

All the cities which are part of Russia’s celebrated 'Golden Ring' tourist route have been faithfully replicated in a spectacular model form.

The ‘Show-Maket Golden Ring’ exhibit is located in Yaroslavl, a city famed for its many old cathedrals and churches.

What is the Golden Ring?

The Golden Ring is a popular tourist route passing through the ancient circle of cities north-east of the Russian capital, Moscow, where unique monuments of history and culture have been preserved.

The installation includes all nine of the official Golden Ring cities, including Suzdal, Rostov, Yaroslavl and Ivanovo - as well as four other ancient Russian cities which the creators decided to add.

The model world features 5,000 tiny residents, hundreds of buildings, and thousands of meters of electric wire to make it interactive.

There are special buttons launching various actions, such as a cable railways and cable cars in the mountains.

There's even a fire engine which comes along to extinguish a fire.

The models aren’t exact replicas of each city in terms of every house and road, but they aim to recreate the atmosphere of the places through copies of the most famous architectural monuments and sights.

25 railway trains and more than 60 cars drive along the cities, stopping at pedestrian crossings and going into petrol stations to refuel.

How are the model cities maintained?

A team of twenty people monitors the ongoing operation every day to provide technical maintenance and repairs in case of accidents.

"Once a week we reassemble all the vehicles, that is what our work is about, so that there are as few accidents as possible, we monitor the current state (of the vehicles)," says Sergey Kornyushin the technical director.

Eight cameras under the model of the cities and nine cameras above help to monitor the operation in real-time, transferring the images to screens in the command-and-control centre.

"If there is an accident somewhere, a train derailed, a car went into a ditch, we go out to the field quickly and sort out these accidents, take the cars away to repair," says Kornyushin.

According to the museum owners, adults turn into kids when they see the display.

The model of the Golden Cities is open every day, seven days a week.

Check out the video above to learn more about the recreation of this famed travel route.