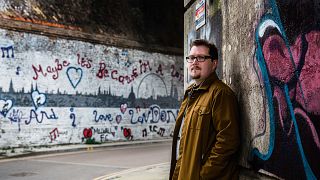 Writer Tom Chivers   -   Copyright  Akiko DuPont
The opinions expressed in this article are those of the author and do not represent in any way the editorial position of Euronews.
By Tom Chivers  •  Updated: 31/12/2021

Tom Chivers is a writer, publisher and arts producer from south London.

He has released two pamphlets and two collections of poetry, the latest being Dark Islands (Test Centre, 2015).

His non-fiction debut London Clay: Journeys in the Deep City (Doubleday, 2021) was audiobook of the week in The Times.

Beneath the river wall, you step between the decaying timbers of London’s maritime past, eyes fixed to the mud and rubble of the beach. It is night. The laughter of drinkers from a riverside pub echoes across the silent foreshore. A sudden noise and you turn: a dog-fox darts across the shingle. His eyes are sparkling in the shadows like gemstones. Someone starts up a boozy rendition of ‘Happy Birthday’ as your boots begin to sink into a slurry of fine gravel at the tide’s edge. Happy Birthday, dear Char–lie. You crouch, then kneel, then reach out your hand.

This is the spot, or hereabouts, from which the cargo ship Mayflower set sail in 1620, headed for the New World, for new beginnings. This year, four hundred (and one) years on, the foreshore of the Thames at Rotherhithe has become my world, and each descent a new adventure – to search for treasures from the city’s past on ground wiped clean twice daily by the tide.

Mudlarking has given my life rhythm and structure at a time of extreme stress, exhaustion and despair.

Mudlarking was my 2020 lockdown discovery, but it’s only in the past twelve months that I have, in the mudlarks’ parlance, ‘got my eye in’. My finds of 2021 include Victorian bottles and brooches, 17th-century coins, lead tokens, sherds of Roman dining ware, Georgian buttons and medieval buckles, two tiny toy plates made of pewter, and a stunning polychromatic Delftware tile that is due to be recorded by the Museum of London.

For many Thames mudlarks, mudlarking is more than just a hobby; it offers respite, stillness and solitude. The foreshore is a liminal space, neither here nor there, and walking it often feels like a kind of meditation. For me, mudlarking has given my life rhythm and structure at a time of extreme stress, exhaustion and despair.

From Bankside to Cuckold’s Point, the river has gifted me not only treasure but time away from emails, Zoom calls, housework and the demands of young children. At low tide, I am transformed into an amateur archaeologist, a performance artist in mud-caked knee-pads, a ghostly figure tramping the margins of the city where past and present intermingle. I can easily spend three hours by the river without thinking once of COVID-19.

While hardly frequent flyers in the best of times, the pandemic has forced us to become hyper-local. I haven’t been to the theatre once, but I have spent many happy hours reading in my local coffee shop (Bru on Quebec Way).

This year I read mostly non-fiction (or hybrid/short fiction) by women: Kindred by Rebecca Wragg Sykes, Notes from Deep Time by Helen Gordon, Mrs Death Misses Death by Salena Godden, Ways of Living by Gemma Seltzer, On Belonging by Saira Niazi, and of course A Field Guide to Larking by Lara Maiklem. On New Year’s Eve I will finish the brilliant (and slimline) Viking London by Thomas Williams.

As the Omicron wave descended on London, my wife and I comfort-watched Mackenzie Crook’s comic masterpiece Detectorists for the third time. Thank God for Netflix. And wine.

In film, 2021 was the year of two ingeniously re-imagined Westerns.

In News of the World and The Power of the Dog, the gun-toting cowboy is replaced by complex anti-heroes played by Tom Hanks and Benedict Cumberbatch respectively. My elder daughter, meanwhile, enjoyed the animated Wild West adventure Spirit Untamed on a rare trip to our local Odeon in Surrey Quays. My two girls (5 and 1) have brought joy, curiosity and boundless laughter to this difficult year. They are much more resilient than I am.

My highlight of 2021 was the publication, in September, of my non-fiction debut, London Clay: Journeys in the Deep City. I have described my book as ‘mudlarking-adjacent’ because it too is about getting ‘hands on’ with history, combining mapping and research with long, meandering walks around London.

Guided by a defaced Streetfinder map, I trace the courses of lost rivers through urban woodland, industrial sites, and into the sewers. I descend into a flooded basement in Westminster, scour Hampstead Heath in search of hidden springs, and uncover geological mysteries beneath Kings Cross and the Elephant and Castle.

A poet by inclination and publishing record, I have spent many years exploring and writing about my home city; at the heart of London Clay is a personal journey to understand what drives this longing I feel for its lost landscapes, its buried stories. Which is why it was so thrilling to welcome old friends and family to the launch of the book at the Brunel Museum, Rotherhithe, and to descend with them into the great Victorian tunnel shaft. For a brief moment afterwards, drinking cocktails on the terrace as the weather held off, it seemed like normal life might finally resume.

I have my brilliant publicist Tabitha Pelly to thank for getting me out of SE16 eventually. In the last three months I have ventured out into the wilds of Dulwich, Chiswick, Hackney and Wanstead, read in the library of Southwark Cathedral, and led a rain-drenched walking tour of the River Lea with the poet Siddhartha Bose.

I did manage to breach the M25 eventually for a trip to Oxfordshire when I appeared at Burford Literary Festival and was later smuggled into the Hook Norton Beer Festival by my godfather and his son.

Drinking real ale in a field as the sun goes down over the Cotswolds – now that is something to treasure.

London Clay: Journeys in the Deep City by Tom Chivers was published in hardback by Doubleday and is also available as an e-book.

Tom's poems have been anthologized in Dear World & Everything In It and London: A History in Verse. He was shortlisted for the Michael Marks and Edwin Morgan Poetry Awards and received an Eric Gregory Award in 2011. Tom has made perambulatory, site-specific and audio work for organisations including LIFT, Cape Farewell, Humber Mouth and Southbank Centre. He was writer-in-residence at Bishopsgate Institute and associate artist of the National Centre of Writing. In 2009 he presented a documentary for BBC Radio 4 about the poet Barry MacSweeney. In 2011 an animated film of his poem ‘The Event' was broadcast by Channel 4’s Random Acts.

He lives in Rotherhithe with his wife and daughters.