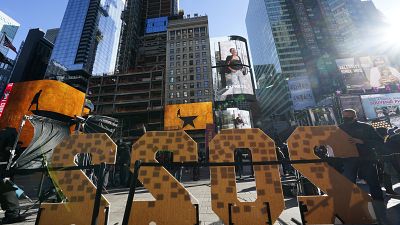 The Greek government has banned music on New Year’s Eve as the country struggles with a surge in COVID cases.

On Wednesday the Greek health minister, Thanos Plevris, said that no music will be allowed at commercial venues for New Year's celebrations.

The measure is part of new restrictions announced to curb the spread of the omicron variant.

The announcement is the latest bad news for party goers in Europe, as the disco lights are turned off across the continent in the wake of the new variant.

Firework displays have been called off at iconic sites ranging from the Acropolis to the Champs-Elysee. Meanwhile authorities in Berlin have prohibited large gatherings meaning once again Silvester cannot be celebrated at the Brandenburg Bridge.

While restrictions across the UK vary, Hogmanay parties have been cancelled in Scotland and London Mayor Sadiq Khan has warned off any crowds gathering in Trafalgar Square.

In Italy, none of the traditional firework displays will happen in Rome and open air concerts are cancelled in Venice.

Despite the vaccines curbing the dire shutdowns of winter 2020, it would seem the pandemic is far from over in Europe.

The Greek restrictions, which have been brought forward from their original start date of January 3, will start early Thursday.

On Tuesday the daily number of infections in Greece rocketed to nearly 22,000 more than double the record number reported the previous day.

The country of around 11 million people is recording dozens of daily deaths due to COVID-19, with 72 announced Wednesday.

Overall Greece now has more than 1.1 million confirmed cases since the start of the pandemic, and more than 20,600 deaths.

Included in Greece's measures are the mandatory use of high-protection masks at supermarkets and on public transport, schedule changes and additional work-from-home orders for government employees, and strict capacity limits at sporting venues.

Entertainment venues will close at midnight starting Thursday, but they will be allowed to stay open until 2 a.m. for New Year's Eve.