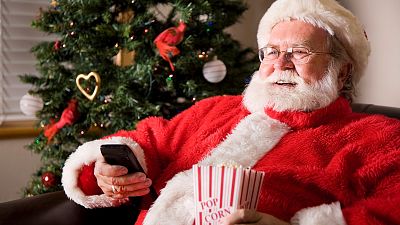 Large suburban houses, warmed by the glow of Christmas lights and a crackling fire; family members spilling in, the grandma that’s accidentally wrapped her cat.

A 36-year-old man dressed like an Elf restores your belief in Santa, while kindness triumphs, as does a house filled with deathly traps for crooks.

Christmas movies set the tone for the holidays, their predictability allowing us to sit, for a while, in the comfort of nostalgia and neat resolutions.

So snuggle down, sip some mulled wine, and peruse our picks for the best festive films.

This unconventional Christmas film takes the saccharine storytelling of the genre, and throws up all over it in an alleyway outside a bar, Santa hat in hand.

The plot focuses on Willie (Billy Bob Thornton), an alcoholic, depressed criminal. Every Christmas he performs as Father Christmas alongside his elf in crime, Marcus (Tony Cox) at American malls, where after getting to know the security systems, they rob the place.

For a film that features lines such as, "you ain't gonna sh*t right for a week!', it's oddly sentimental, with a message that even the most awful of human beings can be transformed into a (slightly) better person by the spirit of Christmas - or a strange kid named Thurman Merman.

What could be more festive than that?

The conversation around whether 'Die Hard' is a Christmas film has become as much of a seasonal tradition as the film itself. Regardless, this fun 80s action romp, starring Bruce Willis and Alan Rickman, is a blast to watch.

Who would’ve thought that a movie about a grown man who’s convinced he’s an elf would go on to become a modern-day classic?

Starring Will Ferrell as Buddy - a man adopted by Father Christmas and raised by elves - he heads to New York to meet with his long lost father, who also happens to be on the naughty list ("Noooooo!")

Its silliness feels self-aware, providing some of the most memorable pop culture quotes (“cotton-headed ninny muggins!”) while it unravels the familiar Christmas tropes of selflessness, the importance of family, embracing our inner child and love conquering cynicism.

We're still on the fence about syrup and spaghetti, though.

There’s a strong argument that every film could be improved with a Muppet remake.

The sincerity of their funny furry faces, the wholesome musical interludes, the subtle humour that keeps the sensitive interactions between Muppet and man perfectly in balance. This adaptation of Charles Dickens’ famous novella has become a classic in its own right, with the genius casting of Michael Caine as Scrooge and Kermit the frog as his long-suffering clerk, Bob Cratchit.

It’s the film’s commitment to earnestness, even as a top-hat wearing Gonzo narrates alongside Rizzo the Rat, that makes this beloved tale’s message of kindness all the more moving.

In a roundabout way, we have former SNL comedian Chevy Chase to thank for 'Home Alone'.

The story goes that filmmaker Chris Columbus had been brought on by John Hughes to direct the festive favourite, 'National Lampoon's Christmas Vacation'. Unfortunately, Columbus found the film's lead, Chase, impossible to work with and quit.

"At the time I was living with my wife's parents," Columbus told Insider. "It took everything in my power to convince myself to resign from 'Christmas Vacation' because I couldn't make the movie with Chevy Chase."

Ultimately, this led to Hughes sending Columbus the script for 'Home Alone', a film about an eight-year-old boy named Kevin McCallister (Macaulay Culkin) who is accidentally left behind when his family go to Paris for the holidays. When a couple of criminals (known as the 'wet bandits') plan to break in, Kevin takes matters into his own hands with a series of booby traps ("This is my house, I have to defend it!")

A post shared by It’s A Wonderful Life (@its_a_wonderful_life_1946)

On the surface, a film about a suicidal man doesn't sound very full of festive cheer. It's this dark topic, however, that gives Frank Capra's Christmas classic, 'It's a Wonderful Life' so much heart and hope.

A guardian angel named Clarence (Henry Travers) shows a woebegone George Bailey (James Stewart) what life would be like if he'd never been born. Similar to Scrooge's journey in 'A Christmas Carol', this objective view of his own existence allows George to recognise the importance of kindness, and in turn, his own self-worth.

It's a beautifully uplifting film that will forever be quintessential Christmastime viewing. Just make sure you have a box of tissues.

Where are the most iconic Christmas trees around the world?