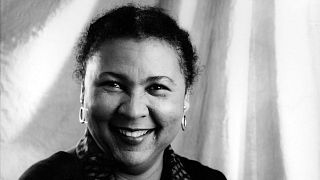 Renowned American author, activist and professor bell hooks has died today aged 69 at her home in Kentucky, US.

According to a statement, hooks had been suffering from illness and died with family and friends at her side.

Born Gloria Jean Watkins in 1952, hooks grew up in a working-class African American family in Hopkinsville, Kentucky. She attended a racially segregated school, before transitioning to an integrated high school - experiences she credited with shaping her view on educational freedom.

In 1973 hooks graduated from Stanford University with a BA in English Literature, while writing her first major work Ain’t I a Woman? Black Women and Feminism - although this wouldn’t be published until 1981.

During her early time in academia, she adopted the pen name bell hooks - always spelt with lowercase lettering to indicate the importance of her work “not who I am” - after her great-grandmother.

An award-winning writer with international reach

Her first published work was a collection of poems called And There We Wept in 1978, while she was in the early stages of her academic career as an English professor and ethnic studies lecturer at the University of Southern California.

After the publication of Ain’t I a Woman? in 1981, hooks’ work began to receive widespread recognition, cementing her place as a seminal figure in feminist theory. In particular, hooks was recognised for her intersectional lens, considering how class, race and gender come together to maintain and compound oppression in society.

In 2014, actress Laverne Cox credited hooks’ 1994 book Teaching to Trangress with changing her life. Cox, who is black and transgender, said the text helped her understand herself and the space she was in while studying at university.

Speaking directly to hooks, in a conversation at the New School in New York, Cox said, “you were writing about unessentialised ideas about what is a woman. You were moving away from these ideas of essentialised womanhood that held feminism back.

The family of hooks has asked for any contributions or memorials to be made to the Christian County Literacy Council or Museums of Historica Hopkinsville Christian County. No further information on what illness hooks was suffering from has been released.

An outpouring of love

Since her death was announced, fans of hooks' work have paid tribute to her online.

"It is not hyperbole to say bell hooks saved me and so many of the women I've been blessed to move through this life alongside," said Hannah Giorgis, a staff writer at the Atlantic. "What an incalculable loss."

Author and screenwriter Bolu Babalola wrote, "inspired every day by her legacy of love."

Others online urged people to engage with hooks' work, even if they were unfamiliar with her previously.

"If you're just learning about bell hooks, there's no shame," notes writer and activist Raquel Willis. "You can always read her words and meet her on the page."

'One of the country's most astute observers': Joan Didion dies at 87

Alec Baldwin's phone to be searched in shooting investigation