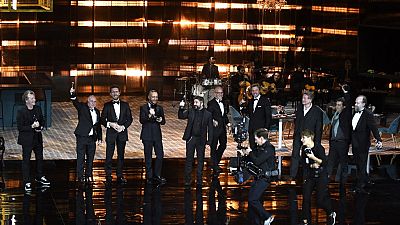 Winners of the Excellence awards stand on stage during the 2018 European Film Awards ceremony at the Maestranza Theatre in Sevilla on December 15, 2018.   -   Copyright  CRISTINA QUICLER / AFP
By Euronews  •  Updated: 10/12/2021

The 34th edition of the European Film Awards will be presented in Berlin on Saturday, in a virtual ceremony that rewards the best of European cinema.

Two weeks ago, the ceremony was re-formatted as a "distanced live event" with no studio audience and just nominees present, as Germany grapples with rising COVID-19 cases, which has led the federal government to ban the unvaccinated from non-essential shops and events.

The nominees were announced in Seville a month ago – the films, coming from the four corners of Europe, had previously been selected for major festivals, even the Oscars, and received awards.

"That's the wonderful thing about our unique prize: the European film awards is that we can really give an overview of all the different voices that are in Europe from the East to the West, South and North, younger, more seasoned filmmakers," Matthijs Wouter Knol, the European Film Academy director, told Euronews.

"Everybody can be part of the European Film awards and I think that's the fantastic beauty of the awards that we can give every year - that we can make that visible and we can honour and give stronger visibility to all these different voices in Europe," Knol went on.

This year's selection of films for the competition reflects on the diverse talents within Europe. It showcases voices like the one coming from Scandinavia in 'Compartment N°6', a Finnish film shot in Russia.

The winner of the Grand Prix du Jury at Cannes, Juho Kuosmanen's 'Compartment N°6', tells the story of a young Finnish woman who escapes an enigmatic love affair in Moscow by boarding a train to the Arctic port of Murmansk and is forced to share the long ride and a tiny sleeping car with a Russian miner.

The unexpected encounter leads the occupants of Compartment N°6 to face the truth about their own yearning for human connection.

Julia Ducournau's powerful and gory thriller 'Titane' is also one of the runners in the competition.

The movie, winner of the Palme d'Or at Cannes, follows the story of Alexia, a serial killer on the run who had a car accident when she was younger and now lives with a titanium plate fitted into her head.

"European directors have really grown, and even compared to Americans, there are a plethora of great directors. I'm not going to start naming them, but we go from Lars von Trier to Pedro Almodóvar, via Paolo Sorrentino, etc," Lindon told Euronews.

But one of the favourites this year is Sorrentino's quasi-autobiographical movie 'The Hand of God', produced by Netflix

Described as one of the Italian director's most personal films produced, the plot follows the story of a boy, Fabietto Schisa, set in the tumultuous Naples of the 1980s.

'The Hand of God' is a story full of unexpected joys, such as the arrival of football legend Diego Maradona, and an equally unexpected tragedy.

Fate plays its part, joy and tragedy intertwine, and Fabietto's future is set in motion.

Sorrentino returns to his hometown to tell his most personal story, a tale of fate and family, sports and cinema, love and loss.

Another close contender is the Franco-British film 'The Father', by Florian Zeller, which has already won two Oscars including best actor for Welsh actor Anthony Hopkins.

Anthony is 80, mischievous, living defiantly alone and rejecting the carers that his daughter, Anne, encouragingly introduces.

Yet help is also becoming a necessity for Anne as she can't make daily visits anymore and Anthony's grip on reality is unraveling.

Lastly, an outsider from Bosnia, Jamisla Zbanic's 'Quo Vadis, Aida?' looks back at the Srebrenica massacre during the Balkan war in 1995.

Aida is a translator for the United Nations in the small town of Srebrenica. When the Serbian army takes over the town, her family is among the thousands of citizens looking for shelter in the UN camp.

As an insider to the negotiations, Aida has access to crucial information that she needs to interpret. She is then torn between the different decisions she will have to take for her family and people: rescue or death?