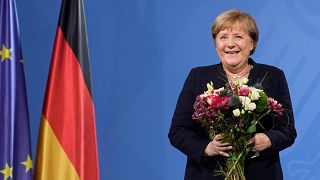 The former Chancellor laughs as she receives flowers from the newly elected Olaf Scholz during a handover ceremony   -   Copyright  AP
By Shannon McDonagh  with AP  •  Updated: 10/12/2021

Merkel, 67, handed over the chancellorship to successor Olaf Scholz on Wednesday after a near-record 16 years in power.

Merkel's longtime office manager, Beate Baumann, told German news weekly Der Spiegel that Merkel "doesn't want to retell her whole life. She would like to explain her central political decisions in her own words, and referring to her journey through life."

Baumann said the book is envisioned as a two-to three-year project and doesn't yet have a publisher, according to Der Spiegel.

"The chancellor and I are sure that, if we do this book, then we will do it alone, without ghostwriters, without historians, without journalists," she said.

Documenting a premiership dominated by crises

A great deal of literature has been produced throughout Merkel's time in power, but never from the woman herself.

Most notably, Herlinde Koelbl's photobook of portraits – released last month – show images taken once a year for over 20 years, recording her rise to power.

Should the book come to fruition, readers can expect an expedition through a tenure dominated by a series of crises, from the global recession of 2007, to Europe's refugee emergency in 2015, and now coronavirus pandemic.

She served as minister for families and women, then as environment minister, before becoming leader of the center-right Christian Democratic Union in 2000, when it was in opposition. She was elected as Germany's first female chancellor in 2005.

Her time in office came to an end after she didn't seek a fifth term. Future career plans are so far undisclosed, though she has said in the past that she will not seek another political role.