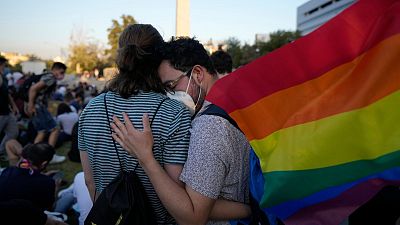 Chileans have been celebrating after their Congress approved equal marriage yesterday.

Votes by politicians were overwhelmingly in favour of the legislation, with the Senate voting 21-8 in favour and the Chamber of Deputies voting 82-20 in favour of same-sex unions.

After the vote in the chamber, several deputies hugged, including some from opposing parties. Outside the senate building, the news was greeted by jubilant scenes, with couples hugging and kissing and some tear-jerking proposals.

The bill, which also legalised same-sex adoption, will come into force in 90-days.

Moments of joy such as this always spotlight the amazing progress of LGBT+ rights around the world, but with much still to be done, which countries are ahead and behind the rainbow curve?

The famously open-minded Dutch led the charge for same-sex marriage in Europe, legalising it in 2001. They were followed two-years later by Belgium and then Spain in 2005, who passed the law despite fierce opposition from the Catholic church and a history of social conservatism under Franco.

In the same decade Spain’s peninsula neighbour, Portugal, also legalised same-sex marriage. Shortly after this the Scandinavians got in on the act with Norway, Sweden and Iceland all allowing gay couples to marry by 2010, and cementing their reputations as the leading liberal nations of Europe.

The teens saw an explosion of equal rights on the continent with France, Germany, Austria, Britain (but not Northern Ireland yet), Luxembourg, Malta, Ireland and Finland all passing laws which gave same-sex couples the same rights as their straight counterparts.

In 2015 (the same year the Irish public voted by 62 per cent to legalise same-sex marriage) Slovenians rejected a proposal on the issue. There are also constitutional bans on same-sex couples getting married in many of the eastern-European states, including Bulgaria, Croatia, Latvia, Lithuania, Moldova, Montenegro, Serbia, Slovakia and Ukraine.

Concerns are also being raised in the international community with the anti-LGBT+ rhetoric of some European countries.

Hungary has been admonished by the EU watchdog for changes to the Hungarian constitution in 2020 that altered the definition of families to exclude transgender and homosexual people. Meanwhile in Russia, presenting homosexuality as ‘normal’ to children is banned under the so-called ‘gay propaganda law’.

Gay-marriage is constitutionally banned in both countries.

Meanwhile Boris Johnson’s UK government has attracted criticism for dragging their feet on banning gay-conversion therapy amid what many perceive as an extremely hostile atmosphere towards trans people in the British media.

Trans recognition is seen as the next frontier for many LGBT+ rights campaigners, with some headway already being made. The new German coalition government is set to legalise self-ID for trans people, a process already legal in Denmark, Portugal, Norway and Malta.

Same-sex marriage in the rest of the world

The US Supreme Court legalised same-sex marriage in every state in 2015, but the country was pipped to the post by its northern neighbour Canada, who allowed gay couples to marry in 2005.

The picture is more complex elsewhere, with Taiwan being the only east or south-eastern Asian country to legalise same-sex marriage despite general acceptance of LGBT+ people in parts of the region.

South Africa remains the only African country to legalise gay marriage on a continent where 30 countries still ban gay sex. Mauritania, Somalia and Sudan all still carry the death penalty for consensual same-sex relations as do many countries in the Middle East including Qatar, Saudi Arabia and Iran.

Australia and New Zealand remain the only countries in the south Pacific region that recognise same-sex marriage.