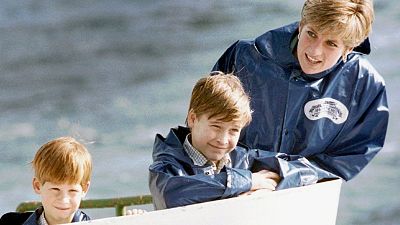 Diana sang at the top of her lungs to Tina Turner while driving her sons to school.

Prince William shared a precious musical memory about his late mother this weekend as part of a new Apple podcast on mental health.

The Prince fondly recalled Princess Diana's penchant for the rock queen's 1989 megahit '(Simply) The Best' and explained how she would sing the song "at the top of her lungs" while driving him and his younger brother Prince Harry to school.

He described it "as a real family moment" and says he thinks she used to do it to distract the boys from the anxieties returning to boarding school.

Does fondness for music run in the family?

Once arrived at the gates of the school, "it was the return to reality" for the young boys.

"Because before you get lost in songs, you want to replay them, just to keep that family moment going. And when I listen to it now, (this song) takes me back to those car trips and reminds me a lot of memories of my mother."

In this recording made for Apple 39-year-old William – who is second in line to the British throne – says he himself likes to start the week on hard rock band AC/DC's hit 'Thunderstruck'.

"There is nothing better on a Monday morning, when you are a little muddy after the weekend and trying to get back into the daily grind of the week," he explained.

Have his three children inherited his mother's love for music? Apparently, they enjoy the likes of 'Waka Waka' – Shakira's 2012 World Cup song.

"Charlotte, in particular, runs in the kitchen, in her dress and her ballet things. She goes completely crazy with Louis following her trying to do the same thing," he told the free 'Time To Walk' podcast which comes out Monday 6 December.

Most mornings, there's a "big argument between Charlotte and George over which song to listen to."

Proceeds from the podcast, which shares never heard before stories about William's life and family, will be donated to the Prince's own charitable trusts.

William also says that Princess Diana had taken him to a homeless shelter to show him "the real world" "outside from the walls of the palace."

He also describes how his job as a helicopter ambulance pilot, which he practiced for two years until 2017, "affected" him because he "brought home the trauma and sadness of people."