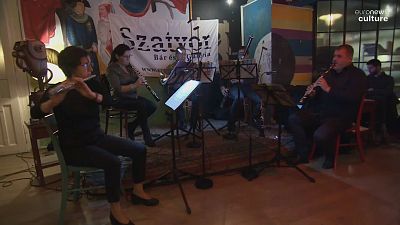 Iván Fischer's orchestra gathered in pubs and bars to perform for revellers across Budapest   -   Copyright  Euronews   -
By Theo Farrant  •  Updated: 06/12/2021

Glass rattling and classical music. On Saturday, for one night only, seven venues in Budapest hosted the musicians of the city’s world-famous orchestra, swapping the stage for bar stools.

From Bach to Beethoven, as well as contemporary arrangements from the likes of John Williams and Lennon Morricone, the 5th Night of Music was alive with the sounds usually reserved for concert halls.

The motto of the evening was: "mini-concerts without constraints", and members of Iván Fischer's ensemble lived up to the standard.

"For the audience, it is good not to eat the food dry, but with a little musical sauce," one of the musicians told Euronews.

An opportunity to 'recruit the audience of the future'

But for Orsolya Erdődy, managing director of Budapest Festival Orchestra, the night was all about reaching to people who wouldn't normally listen to classical music.

"We thought that the Night of Music could be a perfect opportunity to recruit the audience of the future. After all, we go to restaurants, bars, and pubs to play music and we meet many visitors who normally never go to concert halls."

The Festival Orchestra has not allowed the pandemic to get in the way of sharing its music.

Their musicians had performed on trucks on the streets of Budapest, serenaded in the corridors of blockhouses, entertained the elderly in nursing homes, and commemorated the victims of the coronavirus.

Watch the video above to find out more about the people bringing classical to Budapest's nightlife.