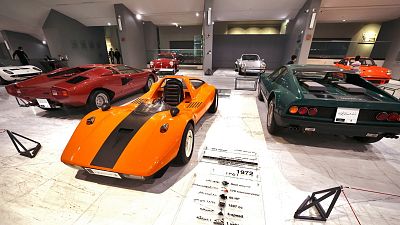 Before they were ousted in the 1979 Islamic revolution, Iran’s royal family enjoyed a lavish lifestyle with a taste for fast cars quite unlike any ever built.

Now, after half a century hidden away, the royal racers are back on show, with the Iran Historical Car Museum drawing in thousands since it opened to the public in recent weeks.

The museum currently houses one of the largest and most valuable car collections in the region, comprising sports cars, limousines, motorcycles and carriages owned by the last Shah of the Pahlavi Dynasty, Mohammad Reza Shah.

"The jewel of the museum is the Pierce Arrow Model A, built in 1930. It was the most expensive car in America at the time. Its price tag was $30,000, equivalent to one-eighth of Iran's state budget at the time, and was purchased by Shah Mohammad Reza Pahlavi, the founder of the dynasty," explains Mohammed Faal, the director of the Iran Historical Car Museum.

Other highlights of the collection include an MPV Tehran Type, a bright orange painted single-seater, that was a “gift” to help prince Reza, who at the time was 12, learn how to drive.

'We consider that these cars are part of Iranian cultural heritage'

In 1979, the pressure on the shah, which had been building for years, became too much and he left Iran on January 16, never to return.

It was the end of the monarchy in a country that had been ruled by kings for 2,500 years.

Exiled Shiite leader Ayatollah Ruhollah Khomeini announced from Paris the formation of a revolutionary council to prepare for an "Islamic Republic."

With the shah gone, Khomeini returned to Iran on February 1.

And by February, the Islamic Revolution had taken hold.

The collection at the Iran Historical Car Museum is curated by the Islamic republic's Bonyad Mostazafan organisation - 'The Foundation of the Oppressed' - which manages the confiscated property of the toppled regime of Shah Mohammad Reza Pahlavi.

Conceptually, the museum seeks to create an atmosphere where cars are seen as an historical emblem.

Around 20,000 people have visited the museum since its opening, more than the number of people who visit the national museum each month.

Check out the video above for a look at the spectacular collection.