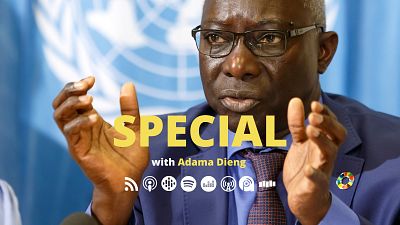 “Genocide is the time of the crimes,” says Adama Dieng, a former UN Special Adviser on the Prevention of Genocide. “Whole societies are affected in the long term and transgenerational trauma is a reality.”

In Cry Like Boy, we have spoken about the trauma caused by Liberia’s civil war. But conflict is a global issue. In this new episode, we ask Adama Dieng about the impact such a violent act as genocide can have on men, women, or victims of rape. And what can be done to prevent genocide.

“A victim of rape can be of any gender and so can the perpetrator. So men too have been victims of rape during these genocides, although facts state that women have been more extremely subjected to such crimes,” Dieng says.

Adama Dieng is a former UN Registrar of the International Criminal Tribunal for the Tutsi genocide of Rwanda. In 2012, UN Secretary-General Ban Ki-moon appointed him as UN Special Adviser on the Prevention of Genocide.

“In the case of the men in Rwanda, of course, what happened was that those men were Tutsis, and were raped by the militia, so beyond the fact that they were being humiliated, there was also clear intent to contribute in humiliating, demonising those men.”

“Rape committed under certain circumstances is equated with the crime of genocide,” Dieng added.

This is a special spin-off episode of Cry Like a Boy hosted by Mame Peya Diaw and produced by Naira Davlashyan and Marta Rodriguez Martinez.

If you want to listen to the first season of Cry Like a Boy, a podcast that takes you on a journey to 5 African countries to meet men who are challenging gender stereotypes, click here. You can also listen to it in French under the name Dans La Tête Des Hommes.