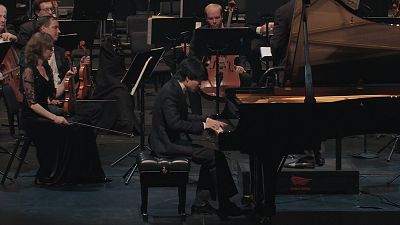 The InClassica International Music Festival is described as the world's biggest musical observatory. It attracts some of the brightest musicians from around the world to captivate existing fans and reach new audiences. This year it was held in Dubai and it showcased a talented and renowned group of musicians.

Kit Armstrong, the famous pianist and composer, took part and he found the experience fulfilling. It was also his first time in Dubai. He described being on stage and communicating the music in his imagination as "the most rewarding thing" he has ever found to do.

But for Armstrong, the most important thing about music is to share it with people all over the world. "Music is something that only happens when you have two sides, you have somebody making the music and somebody receiving the music. It's not a kind of art that can stand for itself. So it's really about the people." he explains

InClassica is all about bringing together world-famous, established musicians alongside young, fresh talent in an accessible and collaborative way. One of the highlights this year was a 20-year-old sought-after Swedish violinist called Daniel Lozakovich.

To Lozakovich, "live performances can make people think in a different way and feel in a different way." They are sources of inspiration. He even feels that if people are willing to listen, live music "can be a great experience that they will remember, maybe until the end of their life."

In the Grand Finale Closing Concert, Lozakovich performed Concerto for Violin and Orchestra in B Minor by Alexey Shor, the composer in residence of the festival. He loves Shor's "beautifully melodic" music and great "lyrical passages and melodies."

To Shor, it was an amazing opportunity to hear his music played by some of the biggest stars and orchestras in the world.

It's just a dream come true

The InClassica International Music Festival is organised by the European Foundation for Support of Culture and is celebrating its 10th anniversary.

Held across Dubai Opera and the Coca-Cola Arena, the festival attracts some of the biggest musicians and talent in the industry, many of whom are keen to perform to new audiences.

One such musician is Maxim Vengerov, a violinist, conductor and professor of music. He chose the violin as his instrument of choice instead of the cello or piano, for example, because as he says: "the violin is next to your heart".

After wowing audiences from Dubai and beyond with 37 soloists, 12 conductors and seven orchestras, the 10th edition of this festival ended on a high note.