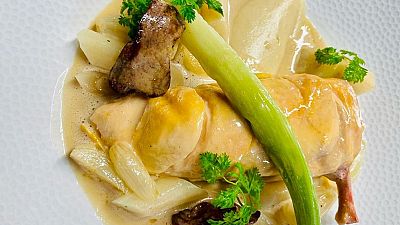 French chef Julien Gautier shares with The Kitchen his Bresse chicken in vinegar recipe, a traditional preparation from the city of Lyon.

The French take their chicken seriously, and volaille de Bresse, or poulet de Bresse, is known to be the best. Bresse is the only breed in the country to benefit from the Appellation d'Origine Contrôlée (appellation of origin), meaning it has very regulated breeding and hence a very distinct taste.

Contrary to what the term "poultry" or "volaille" actually means, that is, any kind of domestic fowl such as turkey, or duck, or goose, volaille de Bresse means chicken of Bresse.

Bresse is not far away from Lyon, where Chef Gautier is based, so the AOC chicken is a signature dish at M restaurant, one of the establishments he runs. He prepares it according to the Lyon tradition, with vinegar and cream.

Cooking the chicken in vinegar allows highlighting both the sweetness of the chicken and the balanced acidity of the vinegar. The cream gives it a French-perfect richness.

For a non-alcoholic pairing: a cox's apple juice from Alain Milliat.

Fast forward to today, Gautier runs the kitchen at both Le Bouchon Sully, a well-known restaurant that honours the city of Lyon’s traditional specialities, and M Restaurant, the establishment where Chef Mathieu Viannay obtained his first Michelin star in 2005. Bresse chicken cooked in vinegar recipe is a classic at M Restaurant.