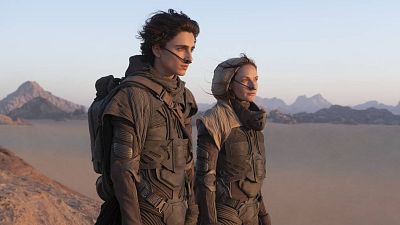 Denis Villeneuve will get to complete his two-part adaptation of Dune as a sequel has been officially confirmed.

The director took a risk by only following the first part of Frank Herbert's 1965 science-fiction novel - but on Tuesday, Villeneuve, Warner Bros. and Legendary Pictures chiefs announced a follow-up film will hit cinemas on 20 October 2023.

The film has been a remarkable mid-pandemic box office success, despite also being put out on HBO Max in the US.

"I just received news from Legendary that we are officially moving forward with Dune: Part Two," Villeneuve said in a statement.

"It was a dream of mine to adapt Frank Herbert's Dune and I have the fans, the cast, and crew, Legendary and Warner Bros. to thank for supporting this dream. This is only the beginning."

Multiple successes in the face of a pandemic

Dune's first instalment opened to rave reviews in US and European cinemas last Friday and has already earned more than $220 million (€190 million) despite the ongoing COVID-19 pandemic.

Its story follows a system of space nobility in a futuristic galactic empire. Its cast of characters are lead to a sandy planet in search of spice, the universe's most valuable resource.

At this trajectory, it'll comfortably place itself as one of 2021s most critically and commercially successful films.

The film's blockbuster budget, the pandemic's effect on ticket sales, as well as the troubled history of the original David Lynch's 1984 adaptation sparked fears it would be an expensive flop, but studio bosses have been impressed by its success.

"Legendary is pleased to officially move forward with Dune: Part Two... once again based on the amazing books written by Frank Herbert," Legendary representatives said in a statement.

The production company were responsible for the production of some of 2010s biggest hitters - Jurassic World and Mamma Mia 2: Here We Go Again, to name a few.

"We would not have gotten to this point without the extraordinary vision of Denis and the amazing work of his talented crew, the writers, our stellar cast, our partners at Warner Bros., and of course the fans! Here's to more Dune."

A wish come true for a cast bursting with star power

Many of Dune's large ensemble cast have banded together to express their desire for the story to continue.

Fans have cultivated a fondness of Villeneuve's spotlighting of the talents of Oscar Isaac, Rebecca Ferguson and Jason Momoa through the eyes of sci-fi.

Award magnets Timothee Chalamet and Zendaya Coleman, both 25, star as love interests in the film.

Zendaya admitted that she'd also enjoy a second stab at playing her character, Chani, to advance her acting education.

"There's so much story left to be told," explained the Euphoria actress.

"I would love to spend more time with these characters. I learned so much as an actress and became better just from that experience of being around Denis, watching him interact with his actors and run sets, and then seeing the way Javier works too

"Selfishly, I want to do (a second film) to have fun and spend time with my friend."