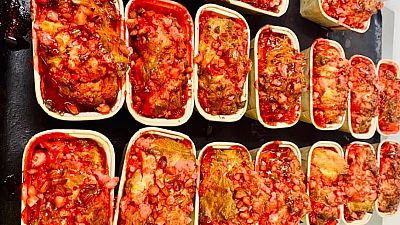 French chef Julien Gautier shares with The Kitchen his brioche with pink pralines recipe, a traditional dessert from the city of Lyon that was passed on to him by his grandmother. The recipe is simple but the outcome is spectacular.

The pink praline is a Lyonnaise delicacy that can be added to several desserts: tarts, cakes, and for a Lyon-original: brioche, but it can also be eaten on its own as a premium caramelised nut. The French praline, different to its Belgian twin, is a combination of top quality roasted almonds and caramelised sugar coloured in pink.

Pair it with: A red Beaujolais such as Fleurie, or raspberry juice for a non-alcoholic pairing.

Fast forward to today, Gautier runs the kitchen at both Le Bouchon Sully, a well-known restaurant that honours the city of Lyon’s traditional specialities and M Restaurant, the establishment where Chef Mathieu Viannay obtained his first Michelin star in 2005.