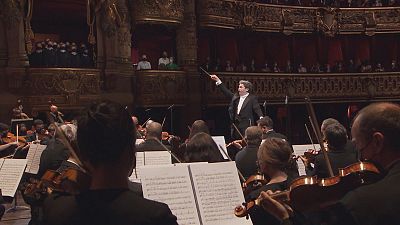 A new beginning full of passion and energy has begun at the Paris Opera. Superstar conductor Gustavo Dudamel recently conducted his first notes for the venerable company in the French capital. Head of the Los Angeles Philharmonic since 2009, the Venezuelan virtuoso has been appointed Music Director in Paris for the next six seasons.

I think it's a new and important chapter in my life, you know, as a musician and as a human being.

His opening concert gave a hint of what to expect from this new era. Some famous classics, from Verdi and Wagner, but also contemporary works dear to his heart, from the likes of John Adams.

"I believe the tradition is always there, but it's a desire also to discover and rediscover things,'' explains Dudamel.

The conductor admits to us he's on a bit his mission to break down barriers and present new works that have never been shown in an effort to attract new audiences to opera.

I think it's [the inaugural concert] a way that we can meet each other, and dance different dances together, you know, it's like on a first date.

Describing his first few weeks in Paris, Dudamel says: "It has been beautiful to be doing these rehearsals with the orchestra and knowing that they are really open. They're really open to them to dance."

The Venezuelan conductor immerses the audience in a universe of Latin American rhythms, reflecting his musical identity.

Mezzo-Soprano Marie-Andrée Bouchard-Lesieur says: "You can tell it's in his blood, this very rhythmic, very percussive, even physical side...you can feel that he has a lot to pass on to young people, in addition to his simplicity and kindness. He has a very positive energy that is immediately apparent.’’

The new General Director of the Paris Opera, Alexander Neef, had the idea to bring Dudamel to the French capital.

"What has always impressed me about Gustavo is his very, very firm belief that music is for everyone, that everyone can understand music. And that we, as the Paris Opera, now also want to be there for everyone," Neef explains.

Dudamel concludes by setting out his vision for the future in Paris: “The mission is to get more connected with the community. We play for an audience. That audience is the community and we want to have more and more and more people, you know enjoy classical music, because in the end it's about access to beauty."