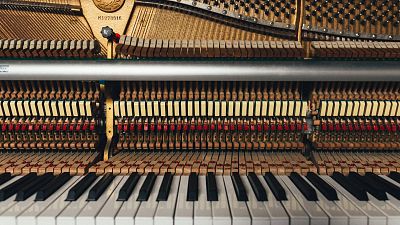 The competition is known for launching the careers of the world's most talented pianists   -   Copyright  Markus Gjengaar/Unsplash
By Shannon McDonagh  & AP  •  Updated: 04/10/2021

Classical enthusiasts welcomed back the 18th edition of the prestigious Frederic Chopin international piano competition this week in Warsaw, Poland.

Over 400 applicants from almost every continent compete every five years in a contest performing the works of the Polish virtuoso.

Fans initially anticipated its return in October 2020, but authorities pushed the competition back a year after social distancing requirements meant banning the usual crowds of fans from attending auditions at the National Philharmonic in Warsaw, which span several weeks.

The first edition was held in 1927 and then every five years, but World War II forced a postponement of the 4th edition until 1949.

The competition builds careers for many budding Chopin's

The competition is reputed for launching world careers for its winners and finalists. Its only provision is that every entry be centered around the works of Frédéric Chopin.

Chopin grew up in Warsaw in the early 19th century and was regarded as one of music's earliest celebrities. He wrote primarily for solo piano but produced two concertos, regarded as the most accomplished pieces of his career. He died in Paris at the age of 39, but his heart remains at the Holy Cross Church in Warsaw.

In fact, there will be no competition auditions on October 17 to allow the participants and the jury to attend traditional observances of Chopin's death anniversary that include a rendition of Wolfgang Amadeus Mozart's "Requiem" at the Holy Cross Church.

How does the competition work?

Successful entrants partake in three stages of solo piano performances, the best of which lead to the promotion to a higher stage, and the final stage where the few finalists play one of Chopin's two concertos with the orchestra.

The concerts from 87 participants from around the world — from South Korea to The United States — begin Sunday morning with the performance of Xuanyi Mao from China. The 17-member international jury includes past winners and finalists. Missing from the jury this year will be Brazil's Nelson Freire and Argentina's Martha Argerich.

What is the prize?

The winner gets a gold medal and a prize of 40,000 euros ($45,000) and prestigious recording and concert contracts. The announcement of the winner is expected to take place October 20.

Among past winners are Argerich, Garrick Ohlsson from the United States, Poland's Krystian Zimerman and Artur Blechacz and Seong-Jin Cho of South Korea.

The auditions can be followed live on the Chopin Institute YouTube channel and on Polish state Radio channel.