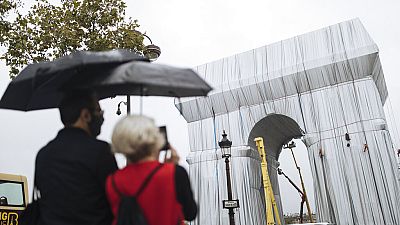 People watch workers wrapping the Arc de Triomphe ahead of the three-week installation on Wednesday   -   Copyright  Lewis Joly/AP   -
By Euronews  with AP  •  Updated: 16/09/2021

A gigantic art installation built around the Arc de Triomphe in Paris was unveiled in the French capital by President Emmanuel Macron on Thursday afternoon.

Visitors will not only be able to see the gleaming fabric, but touch it. From September 18 to October 3, those who climb the 50 metres to the top will step on it when they reach the roof terrace.

The traffic-heavy Place de l'Etoile will also be completely pedestrianised at weekends.

France’s Culture Minister Roselyne Bachelot has called the work “a formidable gift offered to Parisians, the French and beyond, to all art lovers.”

The project was the brainchild of the Bulgarian-born artist Christo Vladimirov Javacheff, known as Christo, who died in May 2020, and his French wife Jeanne-Claude Denat de Guillebon, who died in 2009.

The project was first conceived in the 1960s when the pair were living in Paris and initiated in 2017. "It will be like a living object," Christo had said, "which will come alive in the wind and reflect the light.

"The folds will move, the surface of the monument will become sensual. People will want to touch the Arc de Triomphe."

The 19th-century monument was supposed to be wrapped last autumn but the work was delayed by COVID-19. The €14m project was funded from the sale of Christo’s preparatory studies, drawings, scale models, and other pieces of work.

Ahead of the grand inauguration, visitors flocked to the roundabout to watch workers blanketing the monument with fabric.

“You really rediscover the beauty of the form," said 39-year-old Parisian Agnieszka Wojel. “I couldn’t stop taking pictures because it’s extraordinary... We are very lucky.”

You can watch the launch in the video player above.

Now you can touch it: wrapped Arc de Triomphe opens to the public

Art Paris 2021 shows the artistic introspection of the pandemic