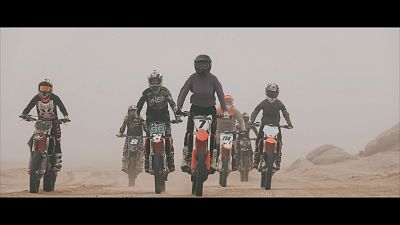 The inaugural Dubai Motorcycle Film Festival has taken place in the UAE. The three-day event featured bike builds, short character-driven films to full-length documentaries that reveal the spirit and soul of the motorcycling community.

It is the brainchild of Festival Director, Ian Carless, who told Euronews that it was a challenging process choosing the films, "There's a lot of content out there, as you can imagine, particularly for motorcycles. So choosing the films… the hardest part of that was actually which ones to leave out."

Over 30 films were screened including Song of Sosa from Director, Cam Elkins, who discussed the importance of these platforms.

"These kinds of festivals just really give filmmakers, particularly motorcycle filmmakers, the opportunity to tell a whole diverse range of stories from different cultures and backgrounds", he said.

Getting the event off the ground was also a rewarding challenge. Rhett Maxwell the General Manager of Honda UAE said that he was thrilled to be part "of the beginnings" of what he expects to be a massive event in the future. "Stuff in Dubai starts small, but it never stays small", he added.

Highlights of the film festival included screenings of 'Fast Eddie', the story of a World War II veteran who still rides every day, and 'Rebel Riders', a film showcasing extreme Vespa Scooter subculture in Indonesia.

"I think for many people that haven't ridden and mainly also for females, if they think that biking is not for them, this is the film to watch. It's very short, quick to the point. It's a lot of fun" he told Euronews.

The second edition of the festival hopes to build on this years’ success and has already been scheduled for February 2022.