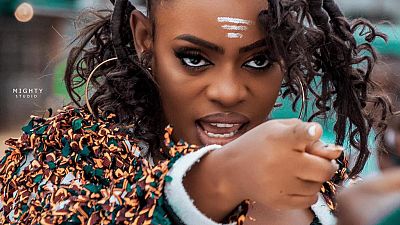 FaithVonic (25) is a Liberian Afropop and “Hipco'' (HipHop) artist – one of the very few female artists on Liberia’s music scene, a country with a turbulent history on the West-African coast.

She says her music is made to make people happy. But she says creating music is also a way for her to escape her personal trauma. It’s her creative coping mechanism after everything that she and the country have been through.

“There's so much in Liberia that we’ve been through,” she says.

“From the war to domestic violence, to rape, to sex. I just can't name it all. It can even traumatise you when you just start to think about it.”

After two civil wars, the last ended in 2003, Liberian society has had to come to grips with the loss of family, sexual and domestic violence and PTSD. But Liberians have had little time to heal their scars. In 2014, the country faced a tragic Ebola outbreak for over two years. They are now dealing with the COVID-19 pandemic.

We’re speaking on a Zoom call. FaithVonic is wearing a necklace with a charm that is shaped like the continent of Africa, and she just posted a photo on Instagram about the beauty of being a Liberian. Her answer: the Koloqau (local language), food, fun and the people.

“We have many problems, but I'm trying to take people’s minds off it, like forget about the problems for once and just identify the beauty you know.”

How does your music help people to forget about problems? “My music brings life to people. I want to celebrate people and bring them together. I also know that music can motivate people, that’s why sometimes I just dive into this humanitarian job as a musician.”

I just dive into this humanitarian job as a musician.

FaithVonic produced a song together with other musicians in 2014 during the Ebola outbreak, to “help people feel alive again”. Now, with the COVID-19 pandemic, her song is meant to raise awareness and invite people to take the virus seriously.

And for you, how does music help you? “For me, music is an escape from trauma. Music calms me a lot. It's like my peace of mind.

“Growing up with my stepfather wasn't the perfect childhood. He was violent, especially after he had a drink. My mom and I as females didn’t have a voice in the house. It was almost like he was our boss. And you don't say anything when your boss is wrong, even when what you think is right. It was scary and at a certain point, I hated men.”

How did your view on men change? “I've been in so many different crises related to men and it makes me stronger really. I know now that not every man is like that.

“A man will never put me in a position where I’m silent anymore. I know my worth, I know who I am and I know what I'm capable of, and besides that, we're not in a century anymore where women remain silent. In Africa, women are supposed to submit to their men once they’re married, but you need to remember that you have a voice. Women need to know their rights.”

How do you make sure Liberian women know their rights? “I use my platform and tell women that I’ve been in their position as well. I go live and talk to my fans. We talk about women, gender violence and how it affects them. They need to know that their situation is not okay and that they can get out. I have never had someone tell me that I could get out. It was just me and God.

“When I partnered up with ActionAid Liberia (a global NGO, focusing on development and human rights) we went to the Red Light Market, a very big market in Liberia. We talked to men and had a very simple message for them; they should appreciate the things that their wives do at home. Some men in Liberia think that the fact that you're a woman, makes it your responsibility to do the chores in the house. It shouldn't be that because you're women you're forced to clean and do laundry. Men can do it too.”

How did the men respond? “Some men were rude when I talked to them. They said that we are changing the mentality of women. I wanted to make them understand that the message is so simple, you guys just have to appreciate the things your wives do. “

Do you see these traditional gender roles also with younger generations in Liberia? “My problem is actually with the younger generation of women. They are not participating in things that men do. In other parts of the world, I see female electricians and mechanics, but you won’t find girls doing that in Liberia.

“I performed once in front of a lot of young girls, most of them were around 17/18. I asked them who wants to be a nurse and almost everybody put their hands up. I said okay that's good, but who wants to be a mechanic? Not even a single girl raised her hand. I was astonished, including the ambassador of the event. She was like huh? you guys don't think you can do it? One of the girls said to me it’s a man’s job, it’s not for women. From that moment I knew that this is one of the problems that is affecting them. This is why women don't really get jobs here. You can’t all work in the same field.”

How do you think this can change? “People need to educate them that some jobs are not only for men, a woman can do it too. They don't have people encouraging them to do a ‘man’s job’.

If I wasn't a musician, I would be a builder. When I see people building a house, I want to learn it, but every time I ask them they have so many things to tell me. The bricks are heavy, it will hurt your hands, just so many excuses, they are not even encouraging me to try.”

Why do you have the mindset to be interested in doing a ‘man’s job’? “I'm the kind of person who wants to learn a lot, I don’t care if it is a man's job and I think there are other girls like me. My mum taught me to be independent, be a strong woman and know how to take care of myself. My father was not around so my mum was a woman and a man at the same time. She said I shouldn’t depend on men entirely in my life. 80 per cent depends on you as an individual.”

Curious about FaithVonic’s music? You can find her songs here. Her music is also featured in the Cry Like A Boy episodes about Liberia, listen to the episodes here.