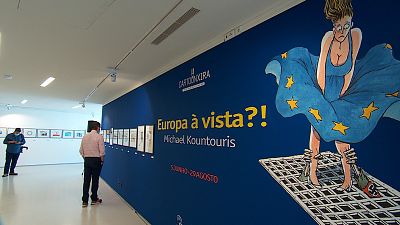 Europe is at the heart of this year's Cartoon Xira, an annual exhibition dedicated to comics, satirical drawings and art. The event that gets its name from the town where it takes place, Vila Franca de Xira, is just 30 kilometres northwest of Lisbon, Portugal.

Three main exhibits make up this year's edition: 'Is This Europe?!', 'RossToons' and 'Cartoons of the Year 2020'.

As its name suggests, 'Cartoons of the Year 2020' is made up of a collection of the best humoristic drawings from a dozen Portuguese artists published over the previous year.

Even though 2020 was marked by events like Brexit, the Israeli-Palestinian conflict and the west's relationship with China, the organisers of Cartoon Xira have put the spotlight of this collection on Trump's departure from the White House and, of course, on the COVID-19 global health crisis. They're highlighting that 2020 was a difficult year and giving it a much-needed humorous interpretation.

João Fazenda is a Portuguese cartoonist. He tells us that last year was "atypical",  "it was a year that also forced us to look at things in a new way". To him, this is reflected in the work at Cartoon Xira.

'Is This Europe?!' is a collection of work from Greek cartoonist, Michael Kountouris. The organisers challenged him to depict the questions and wishes of EU citizens through one hundred of his drawings.

António Antunes, curator and cartoonist, tells us that Kountouris' exhibit may seem like "a critical view of Europe" and even "an anti-European exhibition", but according to him, nothing could be further from the truth.

"It is an exhibition that talks about Europe when it doesn’t act as a united bloc. In my view, this means that European citizens have a series of aspirations, dreams and expectations for Europe that Europe is not fulfilling. It shows the dysfunction between the wishes and desires of citizens and the political reality of the European elite", he adds.

Some of the topics on display in this collection include immigration, the rise of the extreme right, and how the pandemic is calling the role of the EU into question.

To complete the three-part format of Cartoon Xira 2021, there's 'RossToons', a retrospective of the work of Scottish artist, Ross Thomson.

At the age of 83, Thomson is still active and the exhibition in his honour offers a glimpse into his long career in the world of advertising, cartoons and satirical drawings. His body of work has earned him more than a hundred awards and distinctions from all over the world.

His particular vision shows everyday life with a pinch of very British humour.

This edition has also made space for a small tribute to Argentinean Joaquín Salvador Lavado, better known as Quino, the creator of the emblematic "Mafalda". He died on the 30th of September 2020, at the age of 88.

From the humorous side of the COVID-19 pandemic to a view of the European Union, which was marked this year by the Portuguese Presidency of the Council of the EU, without forgetting a satirical interpretation of current affairs, Cartoon Xira is now in true swing. Its doors will be open to the public until the 29 of August.