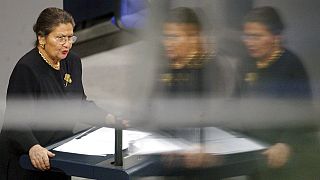 A new exhibition in Paris includes previously unpublished documents concerning the life of one of France's most exceptional women.

Simone Veil born in Nice in 1927, was a survivor of the Holocaust, in which she lost her parents.

She overcame numerous hardships, going on to become a magistrate and government minister who successfully campaigned for abortion to be made legal in France in 1974 when she held the health portfolio.

"There are many unpublished documents because they are documents that have never been removed from the archives and which are being presented to the public for the first time," explained Constance de Gaulmyn, curator at the National Archives, responsible for the Simone Veil collection. "Some of them have been presented in the form of books, reproductions in books that have recently been published on Simone Veil, but others have been found. And here the visitor will have the opportunity to see them in their original form, to take the time to read them, to see how Simone Veil writes."

The exhibition at the Hôtel de Ville, entitled "We Love You, Madame," brings together almost 500 documents from a life steeped in battles and victories for women's rights.

Simone went on to become the first female President of the European Parliament in 1979.

Olivier Rosenberg teaches at The Paris Institute of Political Studies. He's also a curator of the exhibition.

"People will be able to discover a diversity of documents which basically reflect the diversity of the facets of Simone Veil's life," explained Olivier. "Magistrate, minister, European deputy, a witness of the Holocaust and then, to finish her life, a republican icon. To claim that there was no reason for there to be a difference in treatment between men and women."

Four years after her death, the achievements of Simone Veil are still relevant.

The exhibition runs until the 21st of August.