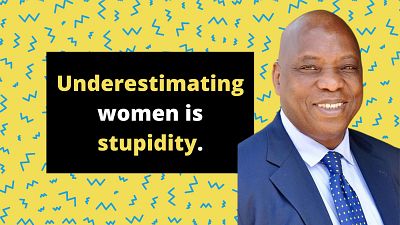 I always repeat this phrase as a personal prayer: Those who love justice, peace and human progress, must resolutely fight so that the rights of oil do not prevail over those of humans. I repeat it to support the path towards a total and inexorable restitution of human rights in general, but in particular for the rights of girls and women.

In 1983, when I was serving as a young doctor in Guinea, a dramatic event took place in my life.

I was then the director of the hospital in Tougué, a rural town far from Conakry, the capital city. One afternoon, five desperate crying women came to me at the hospital, holding in their arms two beautiful 12-year-old twins, Hassantou and Housseynatou. The twins were in critical condition, hemorrhagic and covered in blood. Until then, I had never heard anything bad about what was then wrongly called "female circumcision". Today, we know it by its real name: female genital mutilation (FGM).

I sounded the alarm and mobilised the entire hospital staff to save the twins. My wife, who is a professor of literature, even donated blood for the transfusion. Despite all our efforts, the twins died forty-eight hours after their admission to the hospital. Their deaths shook me. It fet as if I had lost my own daughters. Revolted and determined to prevent similar deaths in the future, I took three days off to write a vicious pamphlet on the dangers of "female circumcision". This was the first step in the new direction that my life would take: putting an end to female genital mutilation.

Shortly thereafter, I took part in the organization of a WHO-supported conference in Dakar, Senegal. On February 6, 1984, we created the Inter-African Committee on Traditional Practices Affecting the Health of Women and Children (IAC), on which I serve today as Executive Director.

For the past 36 years, I have travelled a winding and difficult path that has revealed to me the devastation that is wreaked by female genital mutilation, child marriages, and all other forms of violence against women and girls. Above all, I discovered the greatest stupidity of humanity: undermining and underestimating women, which is really an inversion of the hierarchy of human values.

This phenomenon is often sold in socio-economic packages made up of demeaning concepts or ideas such as "she goes to school just to know how to read and write her name", or "when women are educated, they frighten men", or "women only need microcredit, and that's enough for them", or "if she is not circumcised, she will not be subservient to her husband,” etc.

By analysing these paradigms, it is easy to see that our societies are based on discrimination against and the exclusion of women and girls. This explains the backwardness of all humanity, including those at the forefront of scientific, technical and technological knowledge. No effective algorithm has yet been found, at least not yet elaborated, to educate, convince and guide so-called modern societies towards gender equality.

Attributing this serious misconduct to specific countries, or to a continent such as Africa, only complicates the search for solutions. This is why I fought, as the head of the Inter-African Committee, to participate in the design and adoption of legal instruments at the national, continental African (Protocol to the African Charter on Human and Peoples' Rights on the Rights of Women in Africa) and international levels. I co-authored the United Nations General Assembly Resolution A/RES/67/146 which bans female genital mutilation worldwide. We established February 6 as the International Day of Zero Tolerance for Female Genital Mutilation.

However, beyond texts, conferences, debates, radio and television programs, and seminars, there is a need for an effective and pragmatic cure that addresses the root of this universal societal deviation. The most significant result that I can cite in our fight against this violence against women is the appropriation of the struggle by the victims. Today, girls and women, often supported by enlightened boys and men, are organising to protect themselves, and resist the pressures of their communities and families, who are trying to subject them to all kinds of violence. Progress is slow, but it must always be kept in mind that when it comes to eliminating these practices and paradigms, our victory is inevitable.

That is why when, in July 2020, I had the honour of receiving the United Nations Nelson Mandela Award, I thought to myself “this is a victory for the twins, but the struggle continues”.

Where black women stand in feminism and patriarchy | View

From Angola to Lisbon: My life with toxic masculinity | View