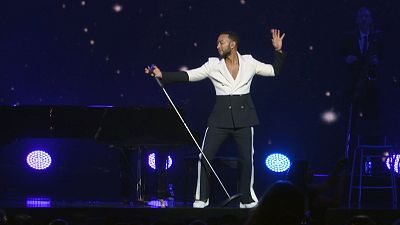 John Legend, a musician and songwriter who shot to fame with the release of his debut album "Get lifted", spoke to Euronews on a visit to Dubai.

The 41-year-old is one of only a dozen people to have won an Emmy, an Oscar and a Tony award and he is the first-ever African-American to do so.

Prior to his singing career, he had composed many hit songs for artists such as Alicia Keys, Twista, Janet Jackson and Kanye West.

Legend has also become known for his left-wing political activism and fundraising. He publically supported Democrat nominee Elizabeth Warren, before she dropped out of the 2020 presidential race.

Before the COVID lockdown, Euronews got to ask him a few questions.

You've played in many cities around the world. What do you think are the main ingredients to create a good, healthy, vibrant music scene within a city?

Well, I think part of it is doing big shows like this. But a lot of what makes and defines a city's music scene is the smaller venues and the local artists that are able to perform at those venues. I think that's what helps create a music scene.

It's always nice to bring a bigger artist in and do big venues like this. But I think what defines a city is whether there's a vibrant market for musicians that live there and can work together and collaborate and perform together in the city.

What does it take to move an artist from the city level to the world stage?

Well, I'm sure there's a lot that goes into it. Some of it is just luck, meeting the right person at the right time. Part of it's the actual artist. What do they have to say? What kinds of songs do they create? And do they have something special that the world wants to see and wants to hear?

You know, if you combine having the right artists, the right material and a little bit of luck, things can work out for the city as a whole.

How important is art for society in a city?

It's the life of the city. A city can exist and it isn't a city that's enjoyable without the culture of the city.

So art, music, dance, all of that education, all these things come together to help kind of define the culture of the city.

You're a musician, a father and a philanthropist, but you're also politically outspoken. How do you think President Trump's impeachment will affect his campaign for re-election?

I don't know how to affect it. Hopefully, he won't get re-elected. But I feel like that was the case whether or not he got impeached or not.

We hope that America, Americans learn a lesson that he isn't. He's not to be trusted with this much power. Hopefully, America has learnt that lesson. But who knows?

Thank you very much, John.

Social distancing is important, but that doesn't mean it has to be boring. I did a little at-home performance to help lift your spirits. @Miguel, @CharliePuth - you want next? Learn more about how you can take action to help slow the spread of coronavirus with our partners at @WHO and @GlblCtzn globalcitizen.org/coronavirus #TogetherAtHome