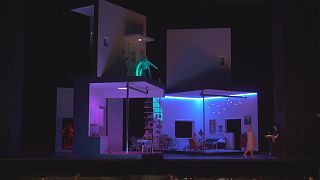 Premiering at the Bavarian State Opera in Munich, “Die Tote Stadt” (The dead city) is a story about grief; a man who lost his wife, Marie and can’t move on.

After eventually falling in love with her look-alike Marietta, Paul is torn between desire and a feeling of guilt.

“The rooms which split up and are put back together reflects the inner conflict," says Nikolaus Bachler, from the Bavarian State Opera.

"I think the stage designer translated that very well. You can also imagine a city in itself, a psychological space. It’s a Sigmund Freud-space.”

“That bathroom is up on the top of the other building. And Paul is downstairs. It creates this feeling like you're in a dream and you cannot reach something even if you feel that you can, because it's not that far away,” says Baritone Andrzej Filonchyk.

The exceptional work has a difficult score written when the composer was just 23 years old, as director, Nikolaus Bachler explains:

“Technically speaking it’s almost unfeasible what the tenor has to do in the first act.”

“I think it’s partly because of Korngold’s young age that he didn’t know how far he could go (where the limits of the voices are). All that he had in mind, all these incredible changes of harmony and rhythm. It’s a crazy maze made up of different styles.”

“Listen to the orchestra pit and watch what is happening there! It’s something you will hardly find anywhere else. Especially with such a difficult oeuvre. How Kirill Petrenko partly dissects it but without ever losing the poetry," says Bachler.

"At the same time, there are these contradictions, these breaks and these surprising flashes which almost bring us back to Hitchcock.”

After a nightmarish trip into the depths of his mind, Paul kills Marietta, but only in his dreams.

But can he finally move on?

“I think that this is a nice idea to leave it unknown or unclear. And even Korngold wrote it in his score, that the stage has to be open till the last bars of the music," says Baritone Andrzej Filonczyk.

"The curtain has to stay up and show the emptiness of the stage.”

From Wagner to Broadway: Terfel takes Sydney Opera by storm