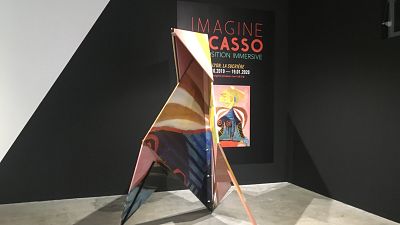 Breaking free from the traditional format and structure of conventional art exhibitions is at the heart of what the new immersive installation Imagine Picasso is all about.

The creators of the exhibition, Annabelle Mauger and Julien Baron, wanted to explore a new way of looking at Pablo Picasso's work. With the help of French architect Rudy Ricciotti, their exhibition lets visitors wander among digital versions of his paintings, projected on asymmetrical origami-style blocks.

"I saw details that I have never noticed before," she said.

More than 200 versions of Picasso works are included in this new exhibition, which opened its doors to the public on Thursday at Lyon's exhibition space, La Sucriere.

Mauger said she was looking to break free from the traditional conventions of displaying art and explore a different way of looking at a Picasso.

"Picasso, when he was asked how his paintings should be displayed, he would say 'badly, we have to display them badly.'"

Mauger said that the modules — the 3D shapes created by Ricciotti on which the artworks are projected — allowed her to "avoid all gravity".

"In the exhibition, some artworks are displayed in a crooked way because they have to adapt to the modules."

For Ricciotti, who received the Légion d'honneur in 2004, the installation creates an entry into "the artist's cubist discourse and make (his art) more accessible to a wider audience."

Cubism, a 20th-century avant-garde art movement pioneered by Picasso and Georges Braque, is characterised by the use of geometric shapes in paintings.

A poetic voyage through Picasso's work

Olivier Widmaier Picasso, Picasso's grandson, described the exhibition as a "revelation" because it allowed him to "re-discover" the artworks of his grandfather and see the "sense of detail and how productive he was".

Widmaier Picasso was moved by a portrait of his mother and Picasso's daughter Maya holding a doll as a child.

"I would also say there is a lot of poetry because you have the freedom to go where you want in this exhibition, you don't have to follow the rules, much like Pablo was not following the rules."

His grandfather's open-mind would have allowed him to embrace the "digital creation" and "get the power of it as he did over a century ago when he was discovering photography," he said.