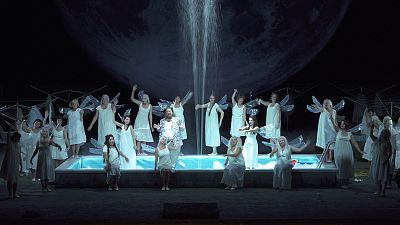 Otto Nicolai's comical-fantastical opera "The Merry Wives of Windsor" is now playing at the Berlin State Opera. Based on the Shakespeare play, it tells the story of the bon vivant Falstaff with German bass René Pape making his debut in the role. A witty comedy of infidelity and mistrust - based on the famous Shakespeare play - but this time with a German twist. Musica Host Katharina Rabillon found out more.

The Berlin State Opera celebrated its season premiere with Otto Nicolai's “The Merry Wives of Windsor” ("Die Lustigen Weiber von Windsor"). In the title role of Sir John Falstaff is the German bass René Pape. German Maestro Daniel Barenboim conducts the lighthearted score. He spoke to Euronews about directing the comedy, fending off accusations that his country people were humourless.

"This piece is part of the DNA of this country [Germany]. It‘s pure German humour."

He was joined by Bass singer René Pape who laughingly reasserted the existence of “German humour”: “though this opera is Shakespeare esque but we are definitely funny people.” He added that the performance interpolated other sources to the original text, “You can also see that in Nicolai's composition. He has interwoven many quotes from other works and there is a light touch to them.”

The German composer conducted at the world premiere 170 years ago but died shortly after (at 38 years old), but left a strong impression on the opera world.

“Nicolai was a very important personality. Born in Germany he worked a lot in Vienna where he founded the Vienna Philharmonic," said Daniel Barenboim.

"On one hand you have this sort of bourgeois idyllic world of the women of Windsor. They are just killing time and start a game with somebody who is totally different from them. And there is the other world of Falstaff, who decides that he wants to live his life differently, not in a bourgeois way."

Dynamics that give the opera strong comedy elements, or as Otto Nicolai called the masterpiece a “comical-fantastical opera”.

“The Fantastical part is this moon choir at the end of the third act and the elves and the mosquitoes and flies and midges," said René Pape. “It’s like a fairy-tale."

David Bösch explains: "That's also the attempt in the third act when the worlds suddenly dissolve, the pool stays there, but suddenly it's in an empty landscape and the worlds come together - it's going to be a fantastic world."